Farmers urged to consider alternatives to nitrogen as prices surge 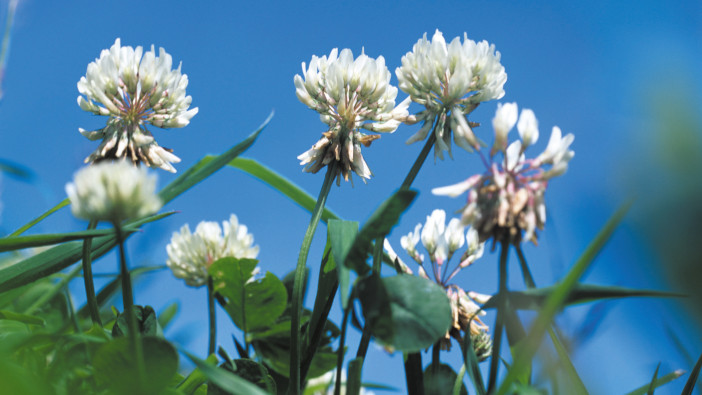 With UK produced ammonium nitrate reaching £297 per tonne in the AHDB fertiliser price series, an increase of nearly 50% year on year, farmers are being encouraged to consider alternative sources such as white clover.

The nitrogen-fixing ability of the legume has seen more farmers consider the legume for inclusion in late summer overseeds and autumn reseeds.

“White clover will fix up to 150kg/ha per annum, depending on soil and climatic conditions,” said Mhairi
Dawson, Barenbrug’s R&D manager. “This can unshackle producers from their reliance on artificial nitrogen.

“And clover itself is higher in protein than grass alone, typically providing a crude protein (CP) content of 27%. Every 10% increase in the amount of clover in the sward translates into a 1 per cent CP increase in first-cut silage.”

Ms Dawson added that some livestock farmers are now relying on white clover alone for their grassland nitrogen requirements.

“There’s no decline in productivity, yet they’re still getting the environmental benefit and the vastly lower costs. Research has shown that the white clover/grass combination produces more dry matter than grass alone. Couple that with improved digestibility – typically clover has a D value of more than 75% – and the result is more meat and milk from the same area.”

White clover can reportedly improve grassland resilience during times of stress, such as drought, flooding or periods of high disease pressure. In wet, late springs or early autumns that prevent the application of artificial nitrogen, clover can provide grass leys with atmospheric nitrogen instead.

For farmers looking to overseed, Ms Dawson recommended a maximum seed rate of 2.5kg per hectare, noting that there are 1.5 million seeds per kilogram.

“Its versatility in seeding is another attraction,” she added. “Apply it with slurry or dung, spin it out from a spreader or even feed it through sheep by adding to a lick bucket or a molasses feed. By adding it while stock remain in the field, it will be pressed in by their hooves.”

The choice of variety depends on cutting and grazing requirements, with small-leaved varieties best for heavy sheep grazing and the largest suited for silage.