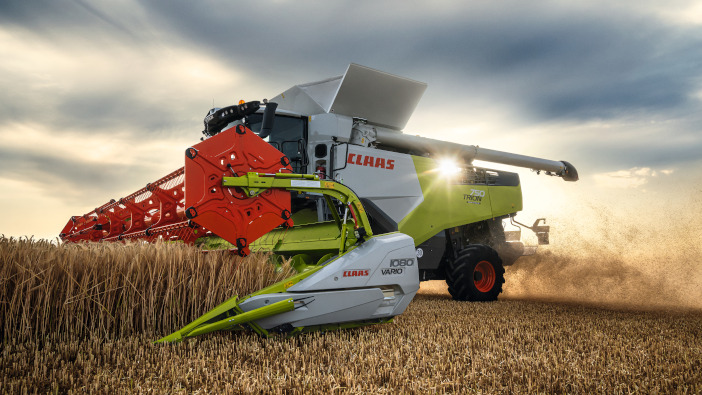 Completing the overhaul of its combine range, Claas has introduced a new 20-model harvester range dubbed the Trion. Spilt into five-walker, six-walker and hybrid machines, with Montana and Terra Trac variants available, the Trion replaces the Tucano range and is in full production now, with only the Tucano 320 machine remaining on the pricelist.

The range comprises two 500 series five-walker models, three 600 series six-walkers, including the new entry-level Trion 640, and three 700 series hybrid units, two of which have a single rotor system while the flagship 750 has a twin-rotor system,

Common across the range is the proven APS primary threshing system, said to thresh up to 90% of grains. 500 and 700 machines are fitted with a 1,420mm wide threshing system, increasing to 1,700mm on 600 machines. This is wider than the previous Tucano machines, which were either 1,320mm or 1,580mm.

The APS system comprises a 450mm diameter accelerator and a 600mm closed threshing drum (reportedly 33% larger than the Tucano). As a result, the concave area is also greater, while the front concaves are interchangeable and the speed of all three drums is synchronised and can be adjusted using the Cebis terminal.

Maintenance has also been improved, with a redesigned and less complex drive system, resulting in six fewer belts on hybrid models and three fewer belts on straw walker units compared to the previous Tucano range. The drive system is based on the Jaguar forage harvesters for positive and smooth engagement.

All five and six walker machines come with the proven Multifinger Separation System (MSS) and an open walker design which is 4.4m long and featuring four steps. The total separation area on 500 models is 6.25 square metres, increasing to 7.48 square metres on the 600.

The cleaning system is further bolstered by the addition of the Jet Stream system, using six or eight turbine fans, meaning it is now available across the full Claas range. Walker machines have the option of 3D sieve adjustment, and the hybrid machines can be further uprated with 4D sieves and other options include Auto Slope fan speed adjustment, Cruise Pilot, Auto Crop Flow and either CEMOS Dialog or the full CEMOS Automatic package.

Power for the Trion range comes from Cummins six-cylinder Stage V engines, chosen for their weight, the level of engine technology (meeting Stage V without the need for an EGR) and a layout that lends itself to easy access and maintenance. As standard, all models come with Dynamic Power, which reduces engine power output when not under load and is said to reduce fuel consumption by 10%. The rated engine speed is 1,900rpm, reducing to 1,650rpm during road travel.

Capacities have also been increased, ranging from 8,000 litres on the Trion 520 up to 12,000 litres on the flagship Trion 750. The unloading auger swings through 105 degrees to improve visibility and unloading rates are between 90 litres per second up to 130 litres. An additional option is the availability of a pivoting spout, controlled using the CMotion joystick, making it possible to adjust the throw of the grain for working on sidehills, or with larger trailers.

Claas has also extended the availability of Terra Trac and Montana variants. For farmers looking to reduce ground pressure, Terra Trac is now available from the Trion 530, making it the first Claas combine of this size to be available with a track system. The system is similar to that used on the Lexion, with full suspension and road speed of 30kph.

The new Trion machines can be combined with the full range of Cerio or updated Vario cutterbars, as well as the Convio and Convio Flex draper style headers, in widths up to 12m. As standard, the Trion range comes with automatic cutterbar detection.

At the rear, there is a wide selection of straw choppers, from the standard mechanical control to the electronically controlled radial power spreader with deflectors for wind compensation. Standard Cut units have 52 knives on narrow body 700 and 500 machines, and 64 knives on 600 machines, also have the option of Special Cut system with 72 or 88 knives respectively.

The Trion range is completed with a brand new cab, with a spacious design offering more leg and head room. A larger windscreen and narrower A-pillars provide greater visibility over the cutterbar and there are new seats, with 30-degree swivel, and footrests to ensure a comfortable seating position.

The latest 12-inch Cebis touchscreen colour monitor is easily adjusted, independent of the armrest, and in addition to the touchscreen, the main functions can be activated using buttons on the armrest.