“Soya has been trading at well over £400/t this year,” said Mhairi Dawson, Barenbrug UK’s research and development manager and regional manager for Scotland. “That’s prompted people to give more consideration to how they source their essential protein ration.”

Ms Dawson added that farmers are increasingly aware of the need to reduce carbon ‘spending’ and are making conscious decisions to reduce food miles – high, in the case of imported soya – and are trying to cut back on carbon-intensive inputs such as nitrogen fertiliser.

Red clover’s ability to fix more than 200kg per hectare of nitrogen is one of the factors driving its popularity, following speculation that under the new Agriculture Bill nitrate vulnerable zones could be expanded or that there will be a stricter approach to nitrogen applications. 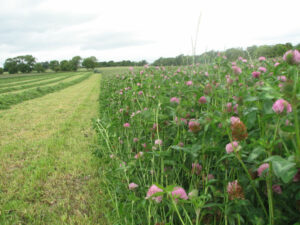 “Red clover presents an opportunity to reduce artificial nitrogen, yet maintain a high-quality forage,” Ms Dawson said. “Defra’s recent urea fertiliser consultation has increased expectations that things will change, eventually, and I think that’s encouraged farmers to consider how they might adapt their operations, to adopt a more sustainable approach.”

As a forage, red clover is palatable and has a favourable crude protein level of 18-20%, making it a good legume choice in pure grass awards. Increased intakes can boost both milk yields and daily liveweight gain and, as a deep rooting, flowering species, it has the potential to be beneficial to the soil structure, building organic matter and providing a food source for pollinators.

Research conducted last year amongst 200 farmers in the Netherlands, where red clover has become well-established, revealed quality, high protein yields, biodiversity and nitrogen reduction were the main factors driving adoption of the legume. In addition, 73% said they planned to continue their use of red clover.

“We also looked at the most successful farmers, those having consistent success growing red clover, to identify which management practices delivered the best results,” explained Ms Dawson. “It’s this research that has informed our new red clover management guidelines.”

More information is available from the Barenbrug UK website.

We use cookies on our website to give you the most relevant experience by remembering your preferences and repeat visits. By clicking “Accept”, you consent to the use of ALL the cookies.
Cookie settingsACCEPT
Manage consent

Any cookies that may not be particularly necessary for the website to function and is used specifically to collect user personal data via analytics, ads, other embedded contents are termed as non-necessary cookies. It is mandatory to procure user consent prior to running these cookies on your website.