Big prices made at the final Cheffins collective sale of 2021 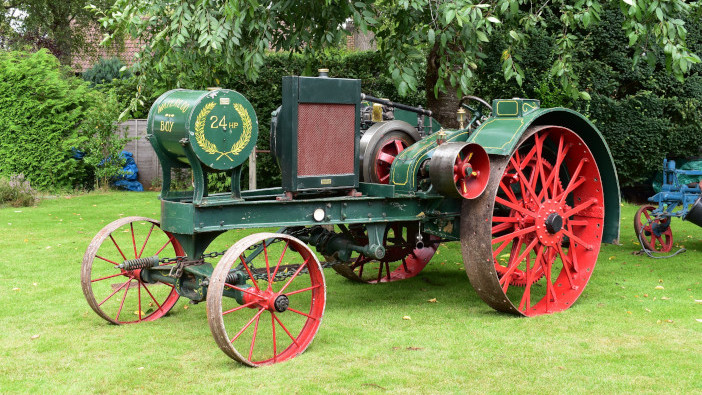 Over 150 vintage and classic tractors, 25 vintage motorcycles, 25 classic cars and commercial vehicles and hundreds of collectors’ items went under the hammer on the 23rd of October for Cheffins fourth and final collective sale of 2021. Hosted at the Cheffins sale ground at Sutton, near Ely, the sale grossed over £1.1 million.

Originally imported in 1915, the Overtime was the British name for the American Waterloo Boy, which was brought into the country by the Overtime Farm Tractor Company. The tractor was discovered in an abandoned state by the present owner in 1959 in Farnham, Surrey and has since undergone a major restoration. It has been used in over 120 ploughing matches and exhibited at 200 shows. Its pre-sale estimate was £30,000 – £35,000.

The vehicles section also saw good sales results, with a 1919 3,048cc Belsize 15/20 Open Tourer selling for £25,440 to a private UK collector. The car saw a lot of pre-sale interest as is it was the first car built by Belsize Motors Limited at the end of World War One and was widely advertised and demonstrated throughout the year as the company’s post-war model. This prototype was then used for the model to go into production in 1920.

Another vehicle that was highly sought after was a 1950 1,600cc Land Rover Series 1, which had been in its current ownership for the past 17 years. This sold for £23,120 against an estimate of £14,000 – £16,000. The unit was reportedly used for filming in the second series of Heartbeat and was sold to a Warwickshire collector.

The motorcycle section saw several early examples, including a 1928 596cc Scott Flying Squirrel, which had been in the same family for three generations and made £7,000. There was also a 1966 649cc Norton 650SS motorcycle which sold for £6,264.

The first part of the Pooley Collection dominated the petroliana section of the sale, with restored and unrestored two-gallon petrol cans, over 80 early oil cans, oil pourers and a petrol pump. The collection reportedly saw unprecedented interest, with a number of items exceeding their estimates, including a Monovo VC Motor Oil early one-gallon can which sold for £932 against an estimate of £350 – £450 and an early one-gallon Shell Oil can with ‘stick man’ image which made £660 against an estimate of £300-£400.

Other popular items included a Ransomes, Sims & Jefferies RTYPL two-furrow ride-on plough which sold for £21,200 and an Atkinson L1586 commercial vehicle which made £18,500.

Oliver Godfrey, director at Cheffins said: “This was our final collective sale of 2021, and what a year it has been! The market for all things vintage has continued unabated and we’ve seen some record-breaking prices paid throughout the year, particularly for the newer classic tractors which are really the toast for collectors at the moment. Other results have shown that the Land Rover Series vehicles can still make some great prices and that the best in class of vintage motorbikes also see a dedicated following.

“The petroliana market is really on fire at the moment and we are looking forward to selling the other parts of the iconic Pooley collection at our Christmas timed online sale and also at the April Vintage Sale. Hopefully, we have many happy buyers and sellers following Saturday’s sale, many of which now have full sheds of both restored and project machines ready for plenty of fun over the winter months and ready for next year.”

Cheffins’ next vintage sale will be the Christmas Timed Online Vintage Auction from the 1st to the 13th of December, for which entries are now invited. For more information go to www.cheffins.co.uk.