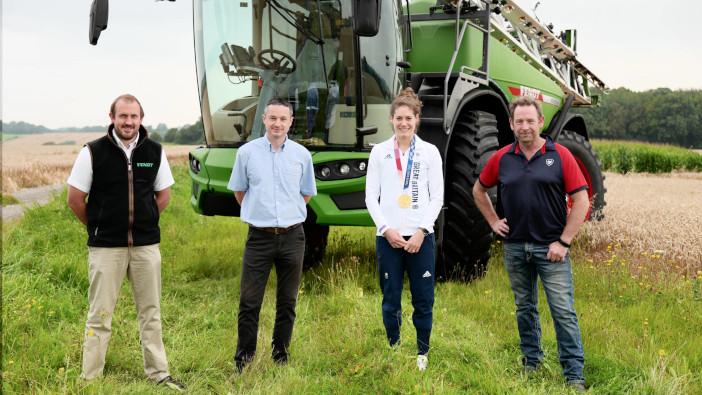 Fred French, a Kent farmer and contractor, has named his new Fendt Rogator 665 sprayer Tokyo to celebrate the gold medal won by his daughter at this year’s Olympics.

The sprayer was supplied by RW Crawford Agricultural Machinery Ltd and is the fourth Rogator to be operated by M & M S French, based at Meopham, near Gravesend.

Around 2,500 hectares are farmed stubble-to-stubble within ten miles of the base, including owned, rented and contract farmed land. Cropping is primarily cereals, with oilseed rape, peas, beans and linseed included as break crops.

The farm’s sprayer works more than 1,000 hours each year and the total area covered has increased as extra applications are needed to tackle blackgrass pressure. Liquid fertilisers are also applied using variable rates based on soil surveys and yield map data.

“We have used liquid fertilisers since 2002, and variable-rate applications since 2005,” explained Mr French. “The technique is particularly effective for maintaining P & K indices, and we sample and compare the same locations every few years to ensure application rates are managed correctly.”

“I really like the design,” he commented. “The front-mounted cab is excellent, the ride quality is second-to-none, and the boom stability and spray accuracy are superb, but a major factor in our loyalty to the brand is the back-up from Crawfords. We are looked after by the Ashford depot now, but even when the dealer’s nearest depot was in Essex we could always rely on the service.

“We operate three combines but only one sprayer which covers a lot of ground, so if the Rogator has a problem it has to be rectified quickly.”

The Sprayer arrived on the 6th of August, coinciding with Mr French’s daughter, Kate French, winning the gold medal in the modern pentathlon at the Olympics in Tokyo.

“Due to Covid-19 restrictions we couldn’t be in Japan to support Kate, so we watched at home,” Mr French explained. “The sprayer arrived within an hour of Kate’s win. It’s the most important machine on our farm and a significant investment, so it seemed appropriate to name it ‘Tokyo’, after the Olympics host city on such a momentous day.”

“I was very lucky,” explained Ms French. “Growing up on the farm meant I spent a lot of time outside. We had horses, and I was always horse riding and running around the fields. I live in Bath now with my husband Leo as the training base is there, but love coming back to the farm.”

When asked about having the sprayer named to commemorate her win, she added: “It’s typical of him to do something like that – I like the nameplate, he will have to keep that sprayer now. I enjoy riding the horses and running when I am back on the farm, but in future, I will want to drive the Rogator too!”

Carl Goff, Fendt brand specialist at the Ashford depot of RW Crawford said: “We get on very well with Fred and he is a good customer, so we were delighted when he asked us to help him celebrate Kate’s Gold Medal win in this way.”