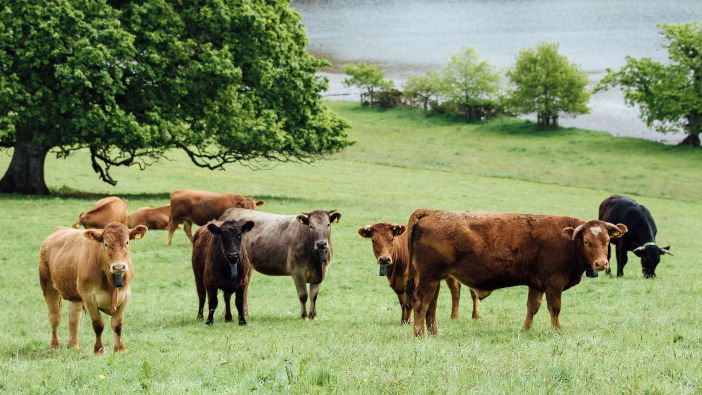 Norwegian technology developer, Nofence, is now making its virtual grazing system widely available across the UK, following more than two years of on-farm testing. Established in 2011, the company uses a combination of GPS, mobile data network, audio signals and solar power to work with animal behaviour and create a “virtual pasture” that can be monitored and moved with a smartphone app.

The app allows farmers to set virtual pasture boundaries that can be moved quickly and easily. Livestock are given Nofence collars, which enables them to be turned out to graze without the need for physical fencing.

Weighing 0.7kg for the sheep collar and 1.4kg for the cattle collar, Nofence has integrated solar panels into the design to ensure long battery life. When the animal crosses a Nofence boundary, a three-stage audio warning is emitted. If the animal does not turn around at the third stage, an electric pulse, equivalent to 18% of a standard electric fence is administered.

“Instead of cows using their sense of sight to see a physical fence to keep them in, they use their sense of hearing. And it has proven to be very effective,” explained Synne Foss Budal, general manager for Nofence UK. “Through observations of herd behaviour on more than 30,000 head of livestock logging more than 75 million grazing hours, a typical farm will have just one pulse per every 30 audio cues. The app allows farmers to track the number and location of audio signals and pulses given to individual animals to allow them to adjust pasture design if required.”

According to farm consultant James Daniel, managing director of Precision Grazing Ltd, virtual fencing will be a game-changing tool that could help the widescale adoption of managed grazing techniques. He trialled the Nofence system in 2020, to validate its suitability for the UK where stocking rates on managed grazing systems often exceed 100 head per hectare and animals are regularly moved to new pastures.

Since then, he has worked with five different livestock farmers on a pilot project to integrate Nofence in a variety of systems.

“Managed grazing increases the productivity of pastures and livestock by working with the plant’s natural growth pattern. If animals are left on a paddock for too long (set stocked), plants are ‘over grazed’ which leads to low productivity, bare soil, pasture degeneration and reduced forage production which ultimately leads to more expense for the farmer,” explained Mr Daniel.

Forage production is maximised by giving pasture adequate rest periods (between 21 and 60 days) in between short grazing events (1 to 3 days) during the growing season. This need to move animals often, while having a flexible rotation length is something virtual fencing can easily enable.

“There are two ways to look at production increase potential. We can keep more animals in the same area which might allow an increase in stock or enable parts of the farm less suitable for grazing to be used for environmental benefit. Or we can reduce inputs, like nitrogen fertiliser or purchased feed, and maintain the same output with a lower variable cost,” added Mr Daniel.

“It isn’t unheard of for farmers to unlock the equivalent of an additional 30-50% area on their farm by increasing productivity,” said Mr Daniel. “There is no more cost-effective way to expand your land availability than improving your grazing management.”

“Perennial plants like grasses and herbs are putting 40-50% of the energy they generate from photosynthesis into the soil. Some of that enables root growth and some of that is directly feeding the bacteria and fungi that live in the soil in exchange for nutrients. This process is fundamental to carbon sequestration,” explained Mr Daniel. “Plants are most efficient at this when kept in their vegetative stage. The most effective and beneficial way to do this is with grazing animals that are being managed properly.”

According to the company, two of the biggest barriers farmers face when capitalising on managed grazing opportunities are access to skilled labour and fencing infrastructure.

“While Nofence doesn’t 100% remove those two factors from the equation, it significantly reduces the impact allowing for minimal fencing based on areas of risk identified by the farmer and freeing up hours of their day that can be spent on planning their grazing strategy and other areas of their business,” said Miss Budal.

Last year, she helped a Northumberland beef farmer convert his electric grazing system to Nofence. Before the transition, it was taking him five hours a day to move fences, leaving him with no flexibility on taking time off. With the new system, it only took a few minutes to move his virtual fences.

“Through the pilot project with Precision Grazing, we’ve seen farmers that were already good grassland managers take things a step further because time is no longer a constrain,” added Miss Budal. “But across the board, we’ve seen a huge improvement in the quality of life of Nofence users due to the amount of time they are saving and the real-time data allowing them to make fast judgment calls.”

Reportedly, the quick adaptability of the product and data analysis will also see it change to a multi-faceted management tool in the future.

“Nofence is constantly analysing data and data capturing opportunities to see what other functions can be integrated into the product. We also firmly believe that in order for it to serve farmers best, it must have their input, so we are regularly working with Nofence customers on what features will best benefit their businesses,” explained Miss Budal.

Future developments are said to include an optional automatic paddock movement timer, based on key data such as pasture cover, crop growth rate, soil type, weather conditions, livestock age and weight. The company is also exploring how animal activity data, such as grazing duration, resting and socialising can be used to improve animal health as early illness indicators.

“Since its inception, the goal of Nofence has been to support farmers by giving them an effective way to improve business efficiency and animal welfare while supporting the environment. But ultimately, to improve their quality of life,” concluded Miss Budal. “The future of grazing is here, and it is only going to continue to get better.”

For more information go to www.nofence.no