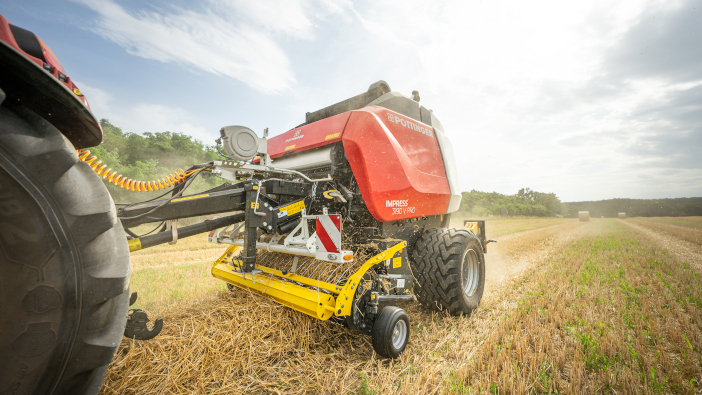 Pöttinger has given its Impress round baler range, fully developed in-house, a facelift to coincide with a host of new features that have been integrated into the machine.

Proven components such as the floating pickup, the Liftup rotor and the chopping system, with up to 32 knives, have not been changed. However, the baling pressure has been increased by 20%, producing denser, heavier bales with the same systems.

The range comprises the 3130 F Master and 3130 F Pro fixed chamber models, as well as the 3160 and 3190 variable chamber machines – available without a chopping unit in the V variant, with a 16-knife chopper as the V Master and with a 32-knife system, load-sensing, ISOBUS control and automated features as the V Pro.

There are also three baler-wrapper combinations available, The 3130 FC Pro is a fixed chamber machine with bale diameters up to 1.3m; the 3160 VC Pro has a variable chamber up to 1.55m; while the 3190 VC Pro variable chamber can produce bales up to 1.85m.

A completely new binding system has been developed, with feed and tension regulated from outside the baling chamber, not from the core of the bale. This means that rolls of material can be used regardless of the condition of the core. The maximum width of the binding material is 1,400mm and the baler can be equipped for film-on-film binding using a tail binging unit.

Hydraulically braking of the roller has replaced the previous electronic system and the settings for net and film wrapping are saved separately. If the changeover between net and film is done frequently, a second binding roll holder can be specified, meaning that there is no need to remove the roll. There is also an optional loading system to support the operator.

An optional LED lighting package is available for Pro models, illuminating areas such as the pickup, the bale ejector and the wrapping platform. LED strips with switches are installed under the side panels when maintenance is been carried out. For cleaning, there is also the option of a hose reel, with compressed air supplied from the braking system through an overflow valve.

Moisture sensors are available, with data shown through the latest Power Control 3.0 terminal. The five-inch touchscreen also allows the direct selection of functions and the input of parameters. The system can be supplemented with an optional camera system, with a separate 10-inch LCD screen to display up to four camera images at once.

There have also been updates to the wrapping platforms, with revised pre-stretch units and holding and cutting devices. The platform can now rotate the bale before and after the wrapping process to tidy up ends of the binding and wrapping layers, preventing loose ends from snagging during transport or storage. In addition, excess air is pressed out between the layers of film.

The film magazines now hold up to 16 rolls of wrapping film or up to 12 rolls of film and two rolls of binding film. Spare rollers for net or binding film are also placed at the front of the baler.

For maintenance, the rotor is now fitted with a freewheel for smooth coasting in all conditions. The status of the machine is now monitored by a service counter, informing the operator of greasing intervals and there is now the option of a 1,000rpm driveline on V and Master machines.

For more information go to www.pottinger.uk