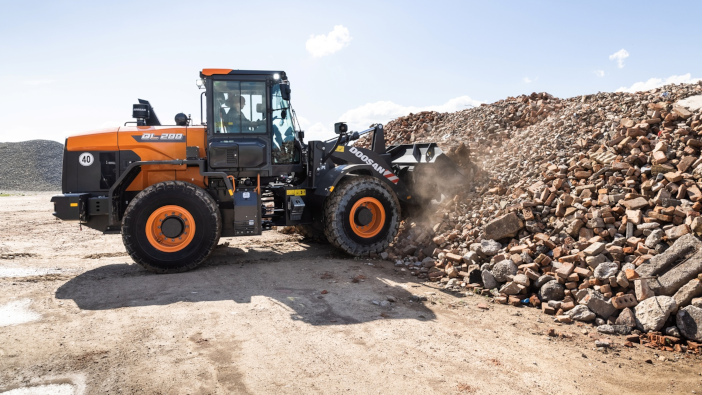 The Doosan Smart Guidance System (DSGS) is a new feature that analyses the driving habits and behaviour of the operator to help them achieve the most fuel-efficient operation. It provides a score and guide of the driving pattern to show fuel economy, efficiency and durability by category.

In the new cabin, blind spots have been minimised and the glass area has been increased by 14% compared to the previous DL-5 generation. It can also be fitted with electrically adjustable rearview mirrors for added safety, while a LED lighting package is fitted. To further protect pedestrians, the LED lights on the rear bonnet have an automatic strobe function to indicate when the machine is reversing.

As an option, an air compressor and air blower are available, fitted in the cabin for easy access for cleaning and daily maintenance.

Doosan Smart Keys are fitted onto the control panel and can be used for keyless starting, as well as remote door control, locking and unlocking, door release searching and other functions. It also features two USB sockets. A Grammer Actimo XXL seat is included as standard, with adjustable horizontal and vertical settings, pneumatic lumbar functions and seat heating.

The new Electric Main Control Valve (EMCV) joystick is fully integrated into the armrest for smooth and precise control of the lift arm and attachments, as well as the return to dig, bucket tilt kick-out and bucket crowd stop position and shock prevention to increase operator comfort. The sensitivity of the joystick can be set and altered accordingly.

There is also a touchscreen terminal, including feeds from the rear camera, the heating, ventilation and air conditioning controls, radio and Bluetooth controls and the operator help function. The redesigned cabin is also said to be larger, quieter and more comfortable than in previous generations.

The DL200-7 wheeled loader is equipped as standard with a third spool valve with the settable flow and detent function, providing a constant flow for hydraulically driven attachments. A fourth spool valve is also available as an option.

Operators can control the attachments with the proportional joystick. The machine is also available with an optional 300kg counterweight. The standard bucket has a capacity of two cubic metres, while the large Z-kinematic lift arm delivers high breakout forces and lifting capacities and a large dumping angle. It’s also available as an HL version, featuring a high lift arm and a counterweight.

The Load Isolation System (LIS) provides a smoother ride and higher comfort for the operator, as well as greater stability. The lift arm is cushioned by a hydro-pneumatic accumulator linked to the lift hydraulic system, acting as a shock absorber. This is said to place less stress on the structure of the machine.

Notably, the DL200-7 is backed up by a standard three year or 5,000-hour warranty. It also features the DoosanCONNECT wireless fleet monitoring system.