Tractor of the Year 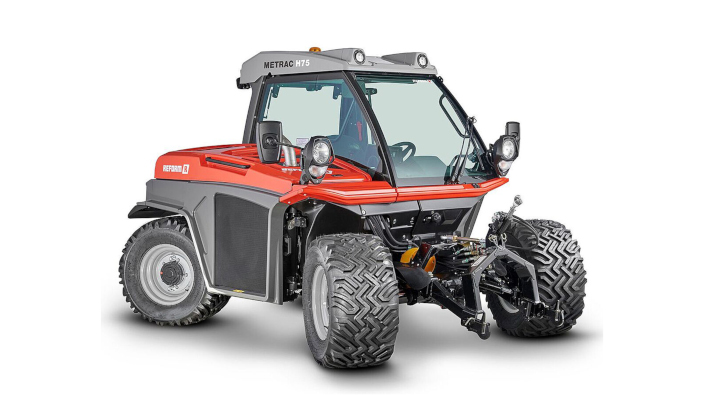 The development of the new generation of Reform Metrac H75 Pro machines has primarily been focused on improving maintenance access and operator comfort, whilst retaining the tractor’s ability on slopes.

The cabin is now decoupled from the chassis and mounted on four hydro-blocks to reduce noise and vibration and controls have been integrated into a new armrest and multi-function, which is mounted on the operator seat for ergonomic use of all functions. Two displays allow the driver to keep an eye on all key machine data, as well as making it possible to integrate guidance and telemetry.

Maintenance has been improved with easy access to the new combination water and hydrostat cooling package through the engine compartment, a new access point to the transmission if required and an undercover hydraulic block at the front of the machine.

In the engine compartment, a four-cylinder Perkins engine offers 75hp at a rated engine speed of 2,200rpm, with 300Nm of torque available at 1,600rpm. The engine meets Stage V emissions regulations using EGR, DOC and DPF systems, which are all contained within the same dimensions as the previous generation of machines.

A two-stage hydrostatic transmission puts the power to the ground with a 40kph maximum speed. As the Metrac features all-wheel and crab steering, the gearbox is automatically limited to 20kph when in these modes. It also features an automatic electro-hydraulic handbrake which can hold the machine in place when working on slopes.

To keep the machine on the ground, the front axle oscillates 15 degrees up and down and the Metrac H75 has a low centre of gravity, incorporating both the engine and the cabin for greater stability.

Front and rear linkages can both lift 1,500kg, with a choice of four or six mechanical or electronic spool valves with a hydraulic flow of 29 litres per minute, with an option to increase this to 52 litres. An independent load-sensing pump handles steering functions. At the rear, the PTO is available in either 540 or 1,000 speeds, while the front system has both.

Into the cabin and the mechanically or pneumatically suspended seat can be specified as a swivel version, which moves with the undulations for greater comfort. Thanks to the decoupling of the cab from the rest of the chassis, noise levels have been reduced to just 74 decibels.

Tractor of the Year – Best of Utility: Claas Arion 470

Tractor of the Year – Best of Specialized: Antonio Carraro SRX 5800