Following the release of March’s agricultural tractor registration figures, the Agricultural Engineers Association (AEA) has published a breakdown for the first quarter of 2021 by region and horsepower bracket. 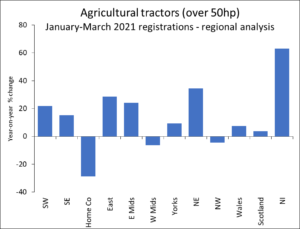 The record number of registrations in March brought the total up to 3,259 machines, 13% more than in the opening three months of 2020. In England, the rise in registrations was more obvious in the east, with the East Midlands seeing an increase of 24.1% from 137 to 170 units; a 28.5% jump from 424 to 545 tractors in Eastern England; and figures in the North East increasing by 34.4%, although the number of machines was just 86, up from 64.

Increases in the east are to expected, notes the AEA, as this part of the country bore the brunt of the wet weather in autumn 2019, which will have affected demand in early 2020.

Some areas saw decreases in registrations, including the West Midlands, dropping from 192 to 180 machines (-6.3%) and the North West, which fell by 15 units from 332 to 317 (-4.5%). The Home Counties and London saw the biggest drop in registrations, from 129 tractors down to 92 (-28.7%), although the AEA recognises that this area, in particular, has seen volatility in recent years. 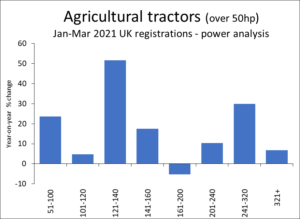 Looking at the horsepower brackets, there were mixed trends, with the biggest increases occurring in the sub-100hp segment, particularly machines under 60hp, between 120 and 40hp, and machines above 220hp.

2021 tractor registrations end on a high

January 18, 2022
We use cookies on our website to give you the most relevant experience by remembering your preferences and repeat visits. By clicking “ACCEPT ALL”, you consent to the use of ALL the cookies. However, you may visit "Cookie Settings" to provide a controlled consent.
Cookie SettingsREJECT ALLAccept All
Manage consent