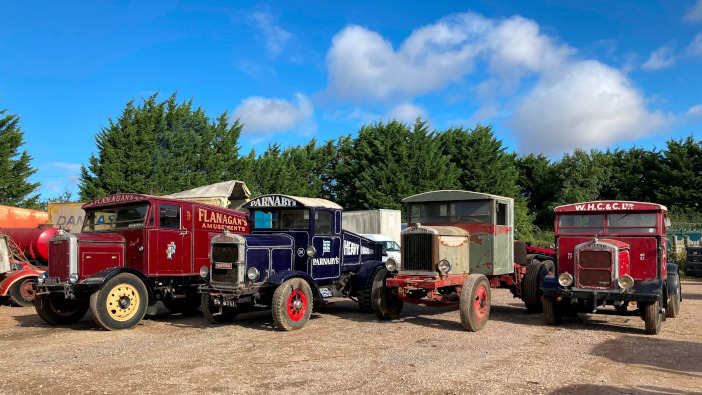 The first-ever Showman’s Tractor, produced by Scammell in 1938, will lead the first part of Roger Austin Collection at a timed online sale via Cheffins, taking place between the 25th and the 30th of November. It’s said to be one of the country’s most significant collections of fairground vehicles and memorabilia.

It is been sold on behalf of the family of Roger Austin, who was one of the leading collectors of Scammell vehicles worldwide. Based in Raunds, Northamptonshire, Mr Austin was a devoted supporter of the Fairground Heritage Trust and started his collection in the 1980s, encompassing many hundreds of pieces of fairground memorabilia at its peak, alongside the 27 vehicles and trailers on offer at this sale.

Leading in the sale is the Paranby ballast tractor, which prior to its current guise, was the first Showman’s Tractor ever built and precedes the famous Showtrac vehicles owned by Hoadleys, as confirmed by a letter from the Scammell Owners & Enthusiasts Club. It was a ground-breaking vehicle at the time, representing an important development from steam engines.

Also in the sale is an original 1946 Scammell Showtrac, one of just 18 Showtracs built by the company and liveried for its first owner Flanagan’s Amusements of Watford. This model was the tenth off the production line and is one of only 17 surviving examples. It has been part of the collection since 1989 and was fully restored at that time.

There will also be a series of spares and a mono-rail children’s funfair electric train ride, with two eight-seat carriages complete in its original packing truck.

Jeremy Curzon, director at Cheffins commented: “Roger Austin was a much-respected character on the fairground heritage scene and his collection was widely regarded as one of the most important in the country. During the 1930s, fairgrounds were a serious money-maker with many operating nationwide, and the fact that Scammell took the steps to build a vehicle simply for showmen was a testament to this. The Scammell Showtrac is an important historical development in the history of the British funfair and marks the turning point in the 1930s where fairgrounds moved from being driven almost solely by steam to using diesel vehicles, and as there were only 18 Showtracs ever built, these on offer at the sale are hugely rare vehicles.

“Throughout the 19th and early 20th century the travelling fairground was an important event and a big business, and these vintage examples from the period are now making some serious money as there is a growing band of fairground enthusiasts all looking to capture some of the excitement of the period. The Roger Austin Collection goes some way to paint a picture of the history of the British funfair and we will be offering the second part of the collection in 2022 which will include a series of historic rides, figures, rounding boards, signs and other memorabilia.”

The collection is being sold on behalf of Mr Austin’s family and they stated: “The lorries & fairground have been a big part of our family life. We have so many memories associated with them, none more so than the sheer pleasure that our father had when people came to visit and look around, he would be happily immersed in the sheds for hours with them. Now it’s time for them to go and we hope that the new custodians of these wonderful vehicles & items of memorabilia will enjoy and preserve them for generations to come.”

For more information go to www.cheffins.co.uk