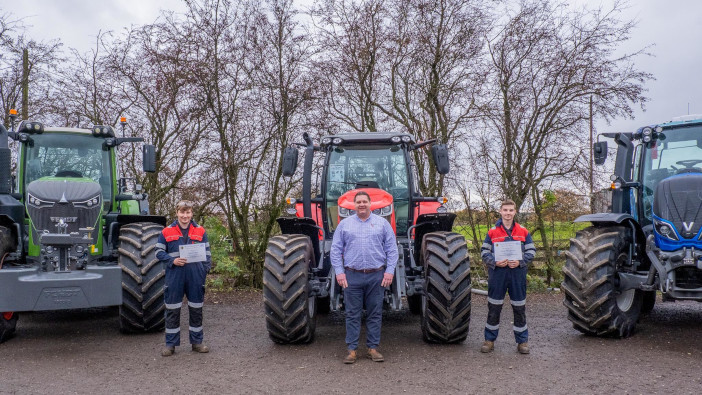 The four winners from 2020 will be present at the event, as the NNAS looks to take on its class of 2021. Successful applicants will receive £500, recognising their hard work, and entries are open until the 15th of October for agricultural apprentices aged 17-25 in the Midlands area.

“The Midlands forms the heartland of agriculture: A network of farming enterprises, agri-businesses and machinery dealerships full of talent and dedicated individuals,” said Simon Eccleston, CEO of NNAS.

“We started up this award five years ago when it became apparent that there was no specific funding award for young people who had chosen one of the many career options within agricultural engineering.

“The award aims to raise the profile of the sector and support young people from diverse backgrounds and skill-sets to develop the abilities they need to embark on successful agricultural careers.”

Frazer Cross was one of the four winners in 2020. Now in his third year of an AGCO agricultural engineering apprenticeship, he is now on track to becoming a fully qualified technician and is completing block release rotations – two months in work, one month in college.

“I started at B&B Tractors in Mansfield in 2019, after working in the automotive trade for three years – after eight months I decided I wanted to become qualified and I started my apprenticeship that September,” he said.

“The day to day is so varied; calls are always coming in so you might be in the workshop one day and out on the farm on another. I am really enjoying the apprenticeship – I just enjoy being around tractors and the challenge of the different mechanics involved.”

While tractors are a draw, he added that crop sprayers are where he sees himself specialising. “For a lot of farmers, the sprayer will be the most important piece of kit. There’s a lot of satisfaction in learning the skills that enable me to go out onto a farm and get these machines up and running again when they run into trouble.”

Mr Cross went on to say that winning the NNAS Agricultural Engineering Award has given him confidence and helped him build trust with his customers as an apprentice technician, as well as helping him fill his toolbox.

“I’d encourage anyone to look at agricultural engineering as a career path,” he said. “Your heart’s got to be in it and it’s hard work, but when it’s harvest time and you’ve got a farmer going again after a breakdown, it’s really satisfying.”

At this year’s event, Mr Cross will be joined by Owen Bradley, Liam Wright and Lewis Woodward, in receiving the second half of their winners’ funding, said event manager Elizabeth Halsall.

“We look forward to welcoming both past and present winners to the showground – alongside the many young people who are yet to embark on their agricultural career paths,” she added. “We hope the celebration of young people will not only foster a talented generation but encourage others to join the fold.”

For those interested in applying for the award, applications can be downloaded from www.midlandsmachineryshow.com. Completed entries should be emailed to harriet.canovan@newarkshowground.com