Autonomous solutions a focus for Horsch 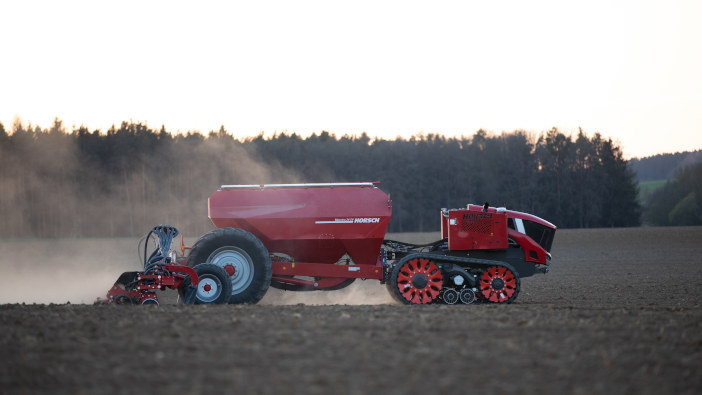 Recognising that there is already a market for autonomous solutions in agriculture, Horsch has been developing a platform to move from task automation to fully autonomous driving solutions – dubbed the Roboter.

Managing directors Michael and Philipp Horsch have focused on these developments since the early 2000s when they introduced the AutoFarm GPS steering system, reportedly the first RTK system for centimetre accuracy.

“We immediately thought ‘If something like this works, we should also be able to drive completely autonomously.’ When we bought our test farm AgroVation in the Czech Republic, we had the chance to focus on CTF and track planning. We originally started with an agronomic point of view, but we soon realised that CTF first and foremost is about planning. This was another step towards autonomous driving systems,” said Michael Horsch.

According to Philipp Horsch, many things associated with the term autonomous should actually be classified as automation.

“Take the example of a tractor that drives with GPS and can reverse on its own. This only is an automation step, there is still somebody sitting on the machine who controls it. Autonomous means there is no driver and we are talking about different vehicles, vehicles without a cabin. What is extremely important: Automation comes before autonomous driving. It is definitely the first step. Automation has been an important topic for years and we have been making good progress. However, there still are quite a few hurdles to clear until we reach complete autonomy,” he explained.

“Today, we solve it by placing a ‘driver’ with a remote control in the field to monitor everything and to intervene in case of emergency. The remote control is effective for a 500m range. These aspects ensure that we can work in the field in a partially autonomous way and be safe,” he said.

In the future, a sensor system will allow the machine to be monitored remotely. For example, warning the farmer when there is a clogging issue.

Changes in the law

At present, the law treats road and field operations as equal but Michael Horsch argues that there are significant differences in the speed travelled and issues with traffic. He explained that autonomous farming will not only require technical innovation but also changes in the law.

“The need for a re-definition and the public pressure to finally create appropriate framework conditions is enormous. If we separated road and field, we could get started in the field much faster,” he said.

Michael added that homologation of the safety concepts, such as camera systems, radar and lidar (light detection) will be essential.

“We hope that in the next few years the safety systems will have developed in such a way that they can be homologised, from a technical point of view we are ready. All this is perfectly sufficient for a test farm, for this is where we want to gather experiences, test machines and integrate them into the farm processes,” said Michael.

Both Philipp and Michael Horsch believe that the technical realisation of autonomous farming will mainly be borne by the next generation, one that has grown up with today’s digital conditions.

“The time of the generation that is into fully air-conditioned cabins and a showy bonnet is coming to an end. The next generation is already waiting in the wings, is 14 to 18 years old and digitally native. The ability to deal with touchscreens, smartphones and tablets is almost innate. These young people control everything that moves completely intuitively and without ever having read a user manual. The users are already there. We have to meet the requirements,” concluded Michael.

For more information go to www.horsch.com