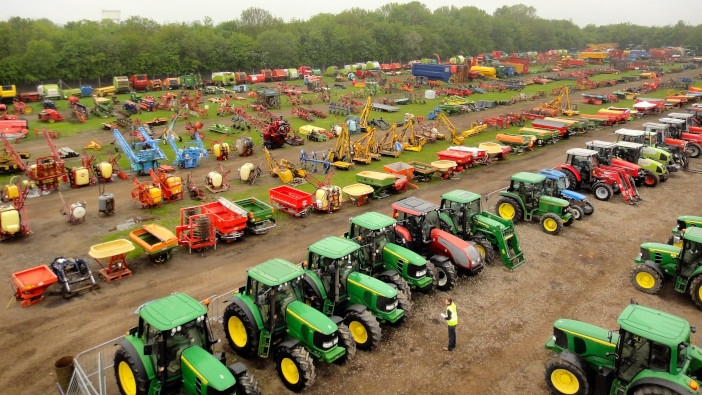 Cheffins has announced that Bill Pepper, partner and head of the machinery department, will leave the firm on 30th June, following thirty years with the company.

Mr Pepper started at Cheffins in 1987, prior to attending The Royal Agricultural College and joined the company full time on 3rd August 1990 when he was 24 years old. Starting as an assistant chartered surveyor, Mr Pepper went on to join the machinery sales team in 1995 and was later promoted to be head of Cheffins’ machinery department.

He plans to pursue other projects, including commercial and recreational opportunities on his family’s farm near Royston and to get involved in residential development ventures.

“I have had the most fantastic career at Cheffins,” he said. “However after being at the firm for my entire working life I have decided that now is the time for a new challenge. Whilst it will be incredibly hard to leave Cheffins and my team, I am looking forward to being able to spend more time with my family, work on other projects and hopefully travel the world once restrictions allow.”

Talking about the development of the Cambridge Machinery Sales, he said: “When I first started all those years ago, the only way to sell machinery was through a weekly publication or via the Cheffins sale ground. There were no internet sales, so I could never have foreseen that we would end up offering online-only auctions as we were forced to throughout the coronavirus pandemic.

“The past 26 years or so at the sale ground has seen Cheffins go from strength to strength to become the leading auctioneer in the second-hand machinery market. Throughout that period, we have seen the rise and fall of the Fordson Super Major trade to Syria, the influx of Eastern European buyers as borders fell, the devastation of Foot and Mouth, the astonishing Sudanese trade for the older Massey Fergusons, the challenges and opportunities created by Brexit and more recently, the havoc caused by the coronavirus pandemic.

“Throughout all of this, we as a team have stayed strong and adapted, managing to continue to service the second-hand machinery market to the highest standards. From standing outside in all weathers selling each lot piece by piece, I have overseen the development of the auction right the way through to the construction of the drive-through building, which was completed in 2016, and most recently the development of the online-only sales during the periods of lockdown.”

Mr King said: “It is with great sadness that we say goodbye to Bill, who has played a crucial role in the development of the Cheffins machinery sale, developing it to where it is today. Bill has weathered many storms for Cheffins and constantly found ways to expand the auction and drive it forward, ensuring that we stay top of our game in spite of whatever political, social or economic events might be surrounding the agricultural and construction industries. We are hugely thankful for his dedication to the firm, and he will be sorely missed by everyone at Cheffins. We wish him all the best for the future.

“With both a strong existing team in place and a couple of new recruits, we are confident that the Cheffins Monthly Machinery Sale will be in good hands following Bill’s departure and we will continue to provide an essential service for the second-hand machinery market.”

The monthly machinery sales have grossed over £7.5 million in the first quarter of 2021 and the company has over 30,000 registered buyers worldwide, with regular sales to Spain, Ireland, Germany, the Middle East, Eastern Europe and Northern Africa.

Dating back to the 1940s and initially located in the centre of Cambridge, the monthly auction has expanded from the sale of a few tractors and accessories to the largest auction of its type worldwide, with approximately 3,000 lots sold per month.

The company has also strengthened its machinery department with the recruitment of Charles Wadsley, who joins as an associate and machinery valuer, and Howard Russell, who take the role of auction administrator. Both joined the company in May.

Mr Wadsley joins the firm after six years at Strutt & Parker, where he was a specialist farm agent, solely involved in the valuation, purchase and sale of farms and estates in the Eastern region. He is a qualified rural chartered surveyor and agricultural valuer and is from a farming family in north Cambridgeshire.

He said: “I have always had a passion for farm machinery, an interest which stems from being heavily involved with the family farm based in North Cambridgeshire. Cheffins is the leading firm of farm machinery auctioneers in the UK and therefore to join the team as a senior machinery valuer and auctioneer was an easy decision. I am excited to be working alongside the best in the industry and I look forward to being involved in a wide range of modern and vintage tractors and machinery valuations and sales up and down the country.”

Mr Russell joins from Royal Studs, Sandringham, where he spent the last two years transporting the Queen’s horses. He started his career in the thoroughbred breeding industry and has run both a small equine breeding farm alongside his own business with global livestock. More recently he worked with Richard Long Ltd, exporting machinery throughout Europe.

“Having lived and worked most of my adult life in East Anglia, agriculture and rural affairs have underpinned both my work and home life. I first became aware of Cheffins over 20 years ago, and with its variety of auction items and the friendly but professional team, I have always held the firm in the highest regard. I am excited to be joining Cheffins and I am looking forward to meeting the firm’s wide range of clients as the pandemic restrictions allow,” he said.

September 17, 2021
We use cookies on our website to give you the most relevant experience by remembering your preferences and repeat visits. By clicking “ACCEPT ALL”, you consent to the use of ALL the cookies. However, you may visit "Cookie Settings" to provide a controlled consent.
Cookie SettingsREJECT ALLACCEPT ALL
Manage consent