New measures to crack down on livestock worrying introduced 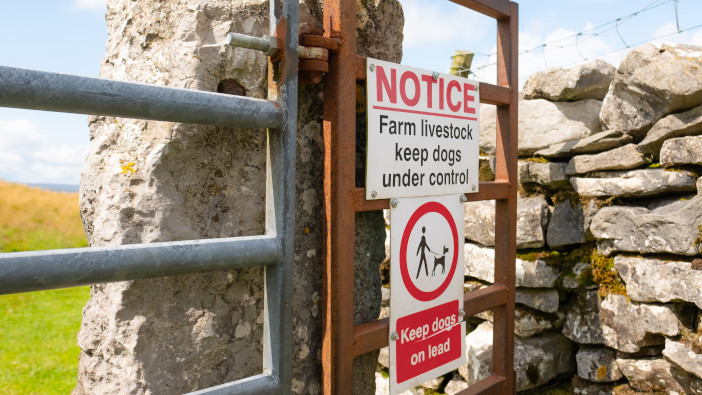 Parliament has introduced new measures to crack down on livestock worrying today through the Kept Animals Bill.

Livestock worrying, which when a dog attacks or chases livestock on agricultural land, or is at large in field with sheep, can result in significant injury or suffering and, in the worst cases, the death of the animals involved. This can also have devastating consequences for livestock keepers, causing personal distress as well as significant financial costs.

The improved powers will enable the police to respond to livestock worrying incidents more effectively, making it easier for them to collect evidence and, in the most serious cases, seize and detain dogs to reduce the risk of further incidents.

This is the second piece of legislation introduced in the last month aimed at driving better animal welfare, following the Government’s decision to formally recognise animals as sentient beings in domestic law (Animal Welfare, Sentience, Bill, 13th May).

As well as the Kept Animals Bill, the Government will also announce a series of reforms related to microchipping, pet theft, farm animal welfare and tackling wildlife crime, as laid out in the Action Plan for Animal Welfare.

Responses to the bill

Farming Minister, Victoria Prentis, said: “Growing up on a farm, and having suffered from a dog attack at home, I know first-hand the devastating effect of livestock worrying and the distress that it causes farmers and animals as well as the financial implications.

“We are cracking down on this issue by introducing new laws to tackle this offence and giving police more powers to act on reports of livestock worrying.”

Minister for Rural Affairs Lesley Griffiths said: “Livestock worrying is a distressing issue and we want to make sure we do all we can to tackle it. We are working with the UK Government on introducing further safeguards through the Kept Animals Bill. I know the measures will be welcomed by many who keep livestock and who live in the countryside.”

Although it is already a specific offence to allow a dog to worry livestock, with a maximum fine of £1,000, these proposed reforms will address current enforcement challenges and modernise the legislation to ensure it remains fit for purpose. Since the implementation of the Dogs (Protection of Livestock) Act in1953 the number of livestock in England and Wales has doubled and there has also been an increase in dog ownership and visits to the countryside.

NSA Chief Executive Phil Stocker says: “The NSA Sheep worrying survey 2021 highlighted the continued increase year on year of these devastating attacks and underlined the significant emotional cost experienced by farmers. Due to the pandemic there are more people with more time to walk dogs than in the past and dog ownership has increased markedly – all of which have added to an increased threat to livestock and livelihoods.

“The NSA welcomes this new Kept Animals Bill that we hope will strengthen legislation to support local police forces and rural crime teams in resolving and hopefully stopping these incidents. We look forward to continuing to work with Defra, and other interested organisations, to address the issue of dogs attacking sheep and other livestock, to change behaviours and attitudes for the good of all.”

Rob Taylor QPM, NPCC UK Livestock Lead said: “We first identified the devastation of a livestock attack by dogs back in 2013 when our dedicated Rural Crime Team was formed here in North Wales. The impact of such offences are truly awful, so we started the long journey to make a positive change.

“With our partners we have come a long way and the law change is the first step to preventing these attacks and to stop animals from being unnecessarily killed, including the dogs themselves. This is all about responsible dog ownership and education and enforcement are both vitally important, so this new law will really make the difference”

Responding the new bill, the NFU has said that it will offer greater protection and be welcomed by farmers who have seen incidents increase over the past year. The changes follow years of NFU campaigning and has the support of the public, with nearly 20,000 people signing an open letter to support the legislation.

NFU deputy president Stuart Roberts said: “Dog attacks on livestock are horrific and can have a massive impact on farm businesses, both practically but also emotionally for a farming family. I’m pleased to see the government taking clear action to strengthen the law in this area to give police more powers and tackle a growing issue for farmers as dog ownership increases.

“This is something the NFU and its members have been working on for many years and it has the support of the public too; nearly 20,000 people have voiced their support for changes to legislation.

“However, we would like to see the government go further in this area and implement increased fines. This can act as an appropriate deterrent and would also reflect the financial loss to the farm business as a result of an attack.

“We would also like to see a clear rule that dogs should always be on a lead around livestock. We believe the current wording that a dog has to be under ‘close control’ around livestock causes confusion for dog owners, farmers and the police.”

The bill also bans the export of live animals for fattening and slaughter, which raises questions of how government will ensure trade deals also meet these standards.

Mr Roberts said: “It’s clear that the government has ambitions to be a global leader in animal welfare, an objective we support, but I would urge them to carefully consider how requirements set at home will be balanced when striking new trade deals.

“While the ban on live exports was expected, it is concerning that the government is pursuing trade negotiations with countries that export large numbers of animals for fattening and slaughter.

“It’s imperative that if we set certain standards for British farmers, we ensure we do not undercut them in trade deals by imports that do not meet those same expectations. If we are to be a global leader in this area, we must hold our trading partners to the same standard and not simply offshore our consciences.”

September 17, 2021
We use cookies on our website to give you the most relevant experience by remembering your preferences and repeat visits. By clicking “ACCEPT ALL”, you consent to the use of ALL the cookies. However, you may visit "Cookie Settings" to provide a controlled consent.
Cookie SettingsREJECT ALLACCEPT ALL
Manage consent