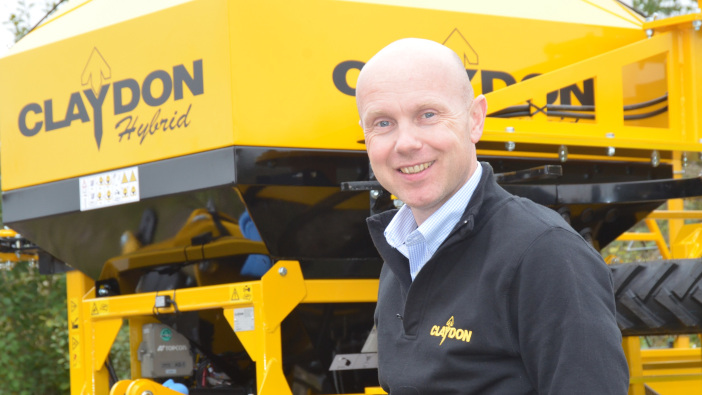 Claydon Drills has announced the appointment of Mike Bywater to the role of territory manager for the southwest of England. Mr Bywater comes to the role with a wealth of experience and will work closely with Rob Dunk, Claydon’s sales manager, within the company’s commercial team. He will cover the area from North Wales to the M1 motorway and down to Cornwall and into west Kent.

“I am excited to be working for Claydon at a time when the industry is on the cusp of major changes and awareness of the need to invest in technology which creates real benefits, rather than simply replacing like for like, is increasing. All businesses are having to find ways to help them control production costs, increase output, and operate more efficiently with less labour, whilst using fewer inputs, improving their soils, increasing biodiversity, and becoming more aware of water management. The Claydon Opti-Till System provides a solution to all of these and other key issues,” Mr Bywater said.

Mr Bywater was raised on an Oxfordshire farm, which his father managed, before studying at Rycotewood College where he achieved a GNVQ Advanced in agricultural engineering. He spent a year travelling and working in Australia before returning to the UK in 2000 to study for an HND agriculture with mechanisation qualification at Harper Adams.

He joined a New Holland dealership in 2005 before moving to Hewden Hire/Speedy Hire in 2006, where he spent four years. Mr Bywater then spent time with Househam Sprayers as a sales & technical support manager before joining Kubota UK in 2013, where he participated in all aspects of the business and worked his way up to group training manager.

Following this, he spent time at Turney Group before coming territory sales manager for trailer and muckspreader manufacturer K-Two before joining Claydon in September.

Rob Dunk said: “We are delighted to have Mike on board. He is a key addition to our team at a time when the company is growing rapidly and demand for our products is increasing rapidly. His extensive knowledge of farming and the agricultural machinery industry will be hugely beneficial in making farmers more aware of time, cost, labour savings and environmental benefits of the Claydon Opti-Till System.”