“The Red Dot Design Award presented to the new G Series is certainly encouraging, especially since this is Valtra’s first product in a completely new generation of tractors and even in what could be considered a new product segment. The G Series is a popular tractor that has already been named Tractor of The Year, which suggests that we are indeed doing things right. Thanks for the award also go to the entire Valtra team, as it 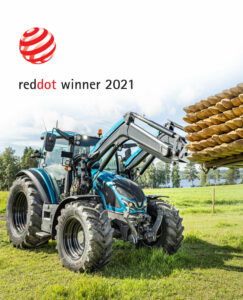 takes the seamless collaboration of hundreds of people to make such a successful product,” said Valtra’s chief designer Kimmo Wihinen.

The Red Dot Design Award has a 60-year history and is considered one of the prestigious design competitions in the world. It takes into consideration the quality of both design and quality, as well as innovations. The Valtra G Series was praised in both these areas.

“Winning the Red Dot Design Award is also the best possible way to kick off Valtra’s 70th anniversary. It says a lot that, even with such an impressive history behind us, our eyes are still set firmly on the future. In fact, we will see several other interesting new products already this year!” Mr Wihinen added.

The G Series was launched in August 2020 and won Tractor of the Year Best of Utility 2021. Designed for multipurpose work, including front loader operations, it features a spacious cabin and the SmartTouch armrest, which won its own Red Dot Design Award in 2017.

Haith to focus on optical sorting at Fruit Logistica

January 26, 2023
We use cookies on our website to give you the most relevant experience by remembering your preferences and repeat visits. By clicking “ACCEPT ALL”, you consent to the use of ALL the cookies. However, you may visit "Cookie Settings" to provide a controlled consent.
Cookie SettingsREJECT ALLAccept All
Manage consent