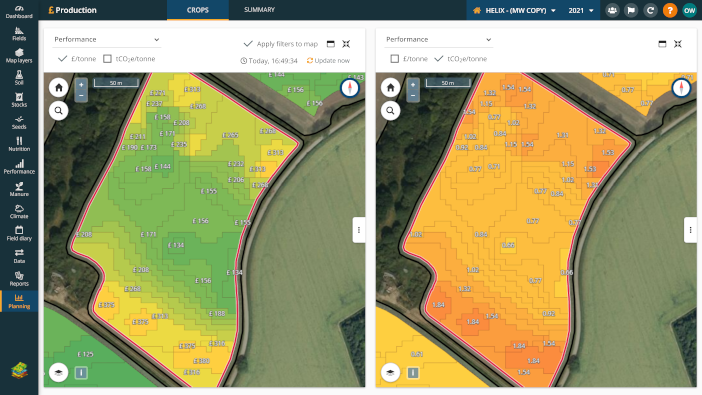 Improved farm productivity is good for business and for carbon collection but the challenge has been how to measure the cost of producing particular crops in regards to carbon. To tackle this, Hutchinsons has introduced a new Omnia Carbon cost of production tool.

Trialled and tested across their Helix farms, the new tool allows growers to calculate the carbon cost of their operations on a per-field basis in terms of both £/tonne, CO2/tonne and CO2/hectare. It adds to the systems ability to identify the poorest and best performing areas of a field, as well as creating an average cost of production.

Available from this autumn, users will be able to calculate on a field and sub-field basis, the financial and CO2 equivalent positions related to growing a particular crop.

Within the Omnia system, information on machinery, variable cropping and input costs are stored. Users can then choose specific operations that they have used to grow the crop. These figures are then presented as a £/ha or tonnes of CO2e/ha. It’s, therefore, possible to see across a single field how certain areas cost different amounts to produce and then compare these costs on-screen.

It’s also possible to bring in additional data such as yield maps to see how yield impacts the carbon and monetary efficiency of a field. For those using the Omnia Field Scout app, it’s possible to log operations as they are completed. For example, as the combine leaves the field, the yield maps are automatically downloaded into the system and the cost of production and greenhouse emissions for that field is calculated automatically.

“This will allow users to delve into greater detail than was available before. In terms of what’s possible from a management perspective, this will enable growers to make far more accurate decisions as the impact of field-management on carbon status is so clear.”

Located at Mears Ashby and Whiston, Northamptonshire, JW Pitts & Sons hosts the Helix Technology Development Farm where new systems are tested in real-world conditions. Andrew Pitts has seen the new Omnia Carbon tool in action and said that it offers another layer of accuracy in understanding what it costs to produce a crop, both financially and in terms of carbon.

He believes that the improved accuracy will help to make decisions going forward with better information, as well as answer questions on how to better manage poor performing areas of a field. He added that this year was a prime example as he decides what cultivation and drilling regimes to adopt after two wet winters.

“While our primary cultivation is always direct drilling, this year we’ve got some ground that’s a bit tight, so we’ve had to move the soil.

“Our environmental and carbon footprint is something we’re really prioritising on the farm so, in my mind, I’ve had to think about which is the lowest carbon way of moving soil. Is it hiring a Challenger? Or would it have been better to run a low disturbance subsoiler over the ground? Now I’ll be able to take the guesswork out of it and make educated, informed decisions.”

Mr Pitts believes that it’s becoming increasingly important to show both financial profit and environmental sustainability and this tool puts him one step ahead. Ultimately pressure for net-zero will continue, and he believes that if he can show end market buyers the value of his carbon emissions per crop, he will be in a stronger position as a supplier.

Hutchinsons continues to work on the Omnia system, with the next stage allowing users to create ‘what if’ scenarios to measure the potential impact of practices and inputs on yields and emissions.