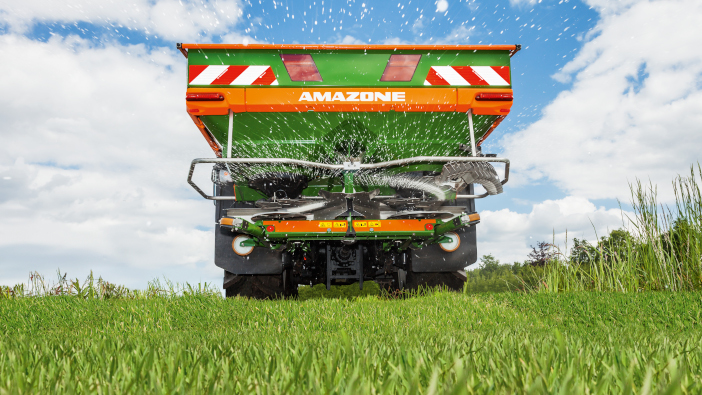 Read through to the bottom to find out how to win 50ha of high-resolution nutrient mapping.

You don’t need to run a large farming operation to benefit from precision farming. Stuart Dickin, who farms 77ha at Aston Farm, near Wellington, estimates that he has already saved several hundred pounds across half that area in his first season of variable rate fertiliser spreading.

“It made sense to make use of this new option,” he said. “It’s not only about the potential cost savings, although these turned out to be substantial, but also because we are coming under greater scrutiny as a sector.

“We need to be doing this to be considered for the higher tier of the Sustainable Farming Incentive, which shows which way payments will be directed in the future.”

After a discussion with his Agrovista agronomist, Rich Frampton, Mr Dickin decided to take the plunge. Decision support specialist Richard Dulake set up Agrovista’s grid mapping service on the farm, which can be used to apply variable rates of P, K, Mg and lime. Further nutrients can be included for an additional fee, with Ca and organic matter proving popular.

The grid map consists of soil sampling points set at 1ha intervals across the entire farm. The operator is guided to each point and then logs it, so the same spot can be repeatedly sampled every four to five years.

“So far we have tested half the farm – the rest will follow this coming season,” said Mr Dickin. “Historically we blanket spread compound fertiliser, but we switched to straights this season and started applying variable rates.

“It’s quite simple – Richard sends an email with an attachment, which I download onto a memory stick and plug into the tractor. The electronics do the rest – there’s no need to calibrate anymore and I know I’m putting fertiliser only where it is needed.”

The first field resulted in a saving on P and K of £18.50/ha, a figure that Mr Dickin says is typical across the farm’s light soils. “I thought the equipment had stopped working in one field – I had to travel three-quarters the way around the headland before it started spreading.

“It just shows how much we have been overapplying. We’ve used a total of 455kg of TSP and 160kg of MOP on 38ha, compared with the 1,500kg of compound we used on the same area last season, a saving of £700. That’s significant, and at current prices would be considerably higher. The service has already paid for itself – just think what a bigger unit could save.”

He added that Agrovista’s service has been excellent. “Richard looks after all the programming and software and has made it all work very well.

“I’ve been with the company for quite a few years and they’ve always delivered. I’ve been to their main trials site at Lamport in Northamptonshire and the work they are doing there is impressive.

“They also seem to get products quite a bit before other people, and the decision support service is pulling a lot of this information together and adding another layer to the company’s offering.”

To be in with a chance to win 50ha of high-resolution nutrient mapping go to www.agrovista.co.uk/precision-comp and complete the form. Agrovista will email you with a link to view the full range of Precision services.