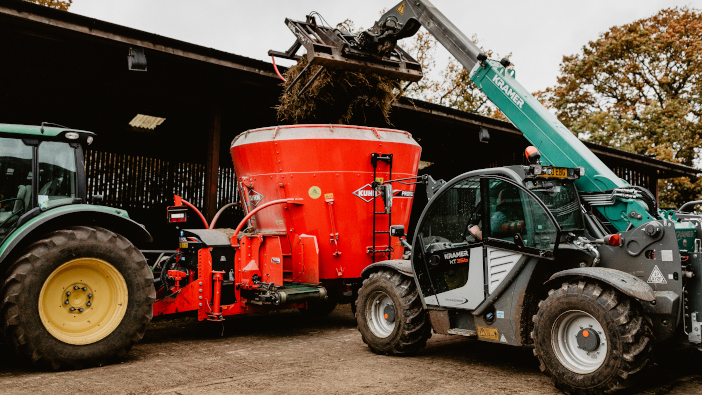 The mechanisation of ration mixing and feeding has resulted in significant efficiencies for beef producer James Moody, who runs a unit of around 250 cattle at N. Shore Farming Ltd in Hampshire.

First introducing a second-hand diet feeder in 2017, the improved presentation of the ration led to an immediate increase in growth rates that cut finishing times dramatically from 28-30 months down to 14-18 months. One year later, he upgraded to a more efficient new vertical auger diet feeder, adding faster mixing and more adaptable feed-out alongside the improved performance of the cattle.

Overall, the two-step transition to a fully mechanised system has revolutionised the beef enterprise that is now making full use of varying forage types, cereals and straw all produced on the farm.

James’ system is to buy in beef-cross calves from the dairy industry at around 10 days old, rearing these on milk and introducing them to a transition ration from 10 to 12 weeks of age.

“We’re buying in steers and heifers, usually bred to Simmental, Limousin, Blue or Angus,” he explained. “They’ll be on twice a day milk feeding for up to 10 weeks and then spend a couple of weeks on once a day milk before we move them into the rearing pens. During this period, they’ll be introduced to a ration including grass silage, chopped straw, beef rearer nuts, protein, minerals and half a kilo per head of rolled barley.”

This transitional ration is mixed in the 15 cubic metre capacity Kuhn Profile single vertical auger diet feeder. The machine has a programmable weighing system, which enables accurate loading of the ration components and allows James to easily add extra barley before moving on to feed the older cattle.

“We’re feeding 4 kilos per head of barley to the older cattle, alongside the other components, so once the calf ration has been dispensed, it’s relatively easy to add the extra barley. It means I’m not making up two entirely separate mixes and can be a lot more efficient.”

When upgrading his diet feeder, James opted for a Kuhn Profile bought from local dealer Hunt Forest Group, who continue to provide essential back-up. A compact machine with a built-in frame, the Profile has proved ideal on a farm where access to sheds can be variable and limited. With a single vertical auger designed to efficiently handle a full range of forage types, the new diet feeder has cut mixing time significantly.

“We’re usually including straw and grass silage of varying quality and dry matters in the ration, all from big square bales, and it’s important to achieve a thorough mix,” explained James. “The straw goes in first, and then the silage, followed by the barley and finally the compound feed. It now takes 25 to 30 minutes to achieve the optimum mix, with the fibre component chopped to around three-quarters of an inch, which is far quicker than it took with the older machine.”

James’ Profile has a single auger constructed of long-life stainless steel that was originally fitted with six standard steel knives and he noted a drop-off in mixing performance during the first six months due to wear on the blades. Frustrated by the need to take a grinder to the knives to maintain performance, he’s had the Profile fitted with Hardox-coated knives and has not looked back.

“The hardened steel knives have made all the difference,” added James, “as the mixing performance is significantly better and I’ve not had to touch them in 12 months. To be able to mix the ration quickly and feed it out at the optimum composition is vital to maintaining operational efficiency and the performance of the cattle.”

Kuhn’s Profile diet feeders are versatile machines, with up to 147 possible permutations in the set-up. In James’ case, the Profile can feed out from either side from a front continuous belt conveyor and has the Flexi-Lift telescoping and tilting distribution conveyor fitted on the right hand side to allow access to a range of different trough heights.

“We’re situated on sloping ground and have up to ten different sheds in use at any one time, so the ability to feed from ground level up to about three feet is really valuable,” he said. “It’s another factor that keeps the operation as efficient as possible.”