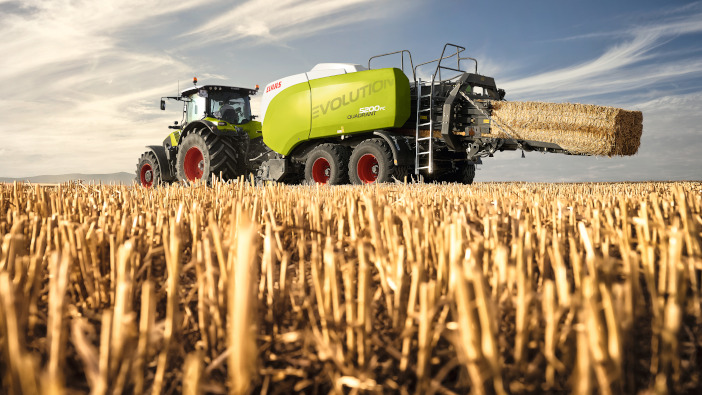 The latest generation of Quadrant 4000 and Quadrant 5000 large square balers from Claas, dubbed the Evolution, have undergone significant upgrades to improve performance in heavy crops and reduce the total cost of ownership.

At the front of the machine, the new HD pick-up features two cam tracks, guaranteeing maximum torsional resistance and robustness, according to the company. Wear costs have also been reduced by using resilient components borrowed from the Claas Jaguar range, as well as work to strengthen bearings, intake panels and other parts.

The mechanically driven pick-up now features five rows of 18 double tines. The added row allows the pick-up to rotate slower, while the speed of the spring-mounted Power Feeding System (PFS) roller has been increased, which compensates for uneven swathes. The feed roller has also received extra paddles, which can be removed when working in long-stalked crops.

These updates are said to enhance raking performance and increase throughput and to handle this, the diameter of the pick-up main drive shaft has been enlarged, while semi-automatic chain tensioning and automatic lubrication ensure reliable working.

The bale chamber has also undergone a series of enhancements, with the redesigned top plate and side panles being strengthened to produce a better bale shape and higher bale density. Factory-fitted side knives and deflectors reduce material build-up in the ram guide area when baling, further increasing operational safety and reducing the cleaning effort. The side knives also help to produce a smooth side to the bale, removing the impression left by the ram bearing channel.

Response speed from the automatic baling pressure control has also been increased and has been made more sensitive to twine tension or load in the intake area.

The Quadrant 5300 Evolution is fitted with a completely new front frame and headstock, while the 5200 Evolution and 4200 Evolution feature the new front frame only. This provides additional hitching positions for drawbar eyes or K80 fitments, and all new models have a new uprated hydraulic stand which is longer than the previous generation and built into the hitch frame. As standard, Kennfix quick-release couplers speed up hydraulic connections.

There have also been modifications to the twine boxes, with a twine guide that swings out and can be locked into position. This means that twine can be threaded when standing beside the machine without having to stretch. From the same position, the twine brakes can be adjusted without the need for tools, and a 10-litre hand wash station is provided as standard.

As an option, the bale ramp can be opened and closed hydraulically from the cab, which enables the fine bale to be ejected from the seat.

Changes have also been made to the electronic control panel of the Quadrant Evolution, which is accessed via Cemis 700, Cebis or any other ISOBUS terminal. There are just two working menus and three settings menus to provide rapid navigation. In automatic mode, the machine capacity utilisation is displayed based on average bale weight and pressure, and the operator can further monitor oil temperature and level from the terminal.

Thanks to the optional Profi Cam 4 camera and the choice of an additional display, the driver can also see working areas such as the knotters, the bale chute or the entire area behind the baler when reversing.