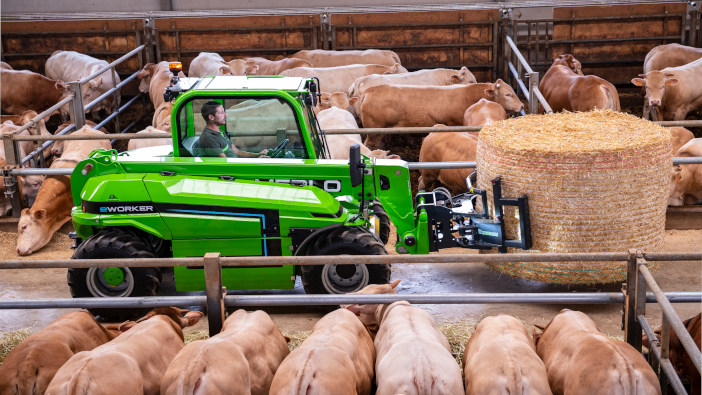 In an online event on the 6th of October streamed from the Palace of Venaria, Merlo introduced the first range of its Generation 0 portfolio. The eWorker is an all-electric telehandler, based not only on the four pillars of the Generation 0 concept (Performance, Comfort, Safety, Efficiency) but also the sustainable aims of zero emissions, zero noise pollution and zero use of fossil fuels.

The new range has been developed from scratch, designed to be fully battery-powered rather than the electrification of an existing diesel machine. Machines are offered in two-wheel drive or four-wheel drive variants, the eWorker 25.5-60 and 25.5-90 respectively. Two-wheel drive units are said to increase the overall autonomy machines as well as a turning circle of just 2,850mm thanks to a steering angle of 85 degrees.

Two electric motors are mounted at the front axle, one for each wheel. On four-wheel drive machines, an additional motor is also positioned at the rear, mounted vertically and flanged on the rear axle. This is said to lower the centre of gravity as the battery is placed in the middle of the vehicle, as well as offering a high steering angle of the rear drive wheels and advantages in electronic traction management, including automatic electronic differentials and regenerative braking.

A final electric motor is connected to the load sensing hydraulic pump to control the telescopic boom. In order to optimise energy efficiency, there is a dedicated electronic control unit to manage the rpm of the electric motor and the oil flow. To reduce power consumption, the boom descends using gravity via a valve controlled by the same unit.

On both machines, the maximum load capacity is 2,500kg, reducing to 1,500kg when operating at full height (4.8m). Both offer a hydraulic flow of 42 litres per minute. The two-wheel drive model produces 44kW, while the four-wheel drive variant offers an increased 66kW, with a 25kph top speed available on both. Both are said to offer eight hours of operation, although this will clearly depend on the task at hand.

All models can be combined with a wide range of attachments including forks, multiple bucket types, equipment for suspended loads and powered hydraulic units. There is also an aerial work platform with its own control panel, allowing operators to drive the telehandler from the platform.

Machines are available with an open or closed cabin, options including a heating system or boom suspension, and all models can be approved for road use as either a self-propelled machine or as a tractor.

For more information go to www.merlo.co.uk