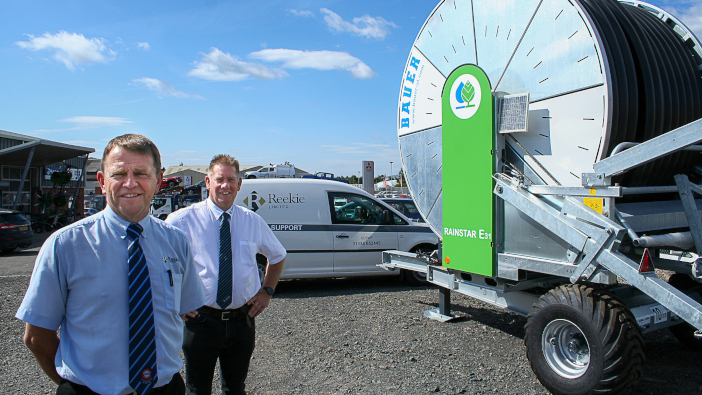 With depots at both Perth and Cupar, covering some of the largest potato and vegetable growing areas in Scotland, Reekie Ltd, part of the Hamilton Ross Group, has been appointed as an official dealer for Bauer’s range crop irrigation equipment.

The company has already supplied a Bauer Rainstar E31 system to a long-standing customer and has taken a second E31 into stock, as well as placing a substantial order for critical parts.

Sam Mercer, general manager at Cupar and Perth, said: “We have a long-standing involvement with irrigation equipment and wanted to get back to supplying new irrigators again with a premium brand that would sit well alongside our agricultural machinery franchises.

“In Bauer, we have that premium brand; the company has a well-deserved reputation for its engineering and manufacturing quality, and the performance and durability of its irrigators.”

Rob Jackson of Bauer UK & Ireland said: “We’re delighted to have reached this agreement with Reekie Ltd, an established and well-respected dealership with people in sales, service and parts who know and understand irrigation equipment and the crucial part it plays in growing high-quality, high-value potato and vegetable crops.

“We are already taking orders and securing build slots at the factory for irrigation reels to be delivered in time for next year’s growing season, so it’s important for growers to look ahead and plan their requirements now for next year and beyond.”

Bauer has been known for irrigation equipment design and technology for more than fifty years. From its facility in Voitsberg, Austria, the company produces couplings, rigid and flexible PE piping, precision components and the Rainstar units with fully galvanised chassis and reel structures.

It also developed the Vario variable output nozzle which exploits what pressure is available by delivering full stream flow over the turbine’s impeller, regardless of the settings. Fitted as standard for all UK and Ireland models, the Ecostar 6000 controller maintains a constant hose retraction speed and has a simple touchscreen that provides text message communications.

Bauer also offers the SmartRain telematics system that can notify managers and keeps a record of all irrigation events, including water consumption.

Steven Player, Cupar area sales manager, is enthusiastic about the new partnership with Bauer: “There’s a fair few Bauer irrigation reels operating across our area and the fact that many of them are as much as 20 years old illustrates how well built they are.

“But many are ripe for replacement, and we can maintain continuity for growers – or replace other makes – by supplying a new top-class Bauer reel. Just as importantly, because our service technicians and parts department staff are all familiar with this type of equipment, we can also look after the irrigators properly when put to work.”

Yeowart Agricultural takes on McCormick franchise for Surrey and Sussex