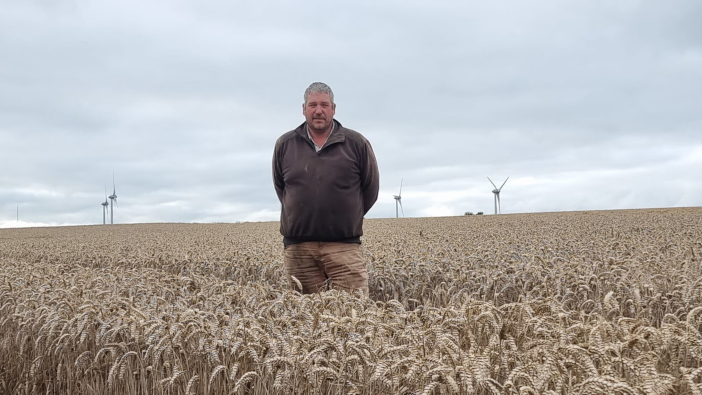 A small but ongoing decline in crop performance following a switch to direct drilling has prompted Northumberland grower John Miller to take a closer look at his soils.

While the initial aim was to investigate soil texture and structure, more detailed investigations have been adopted to examine soil health, organic matter content and carbon levels with an eye to securing future income from support payments and carbon trading.

“We moved to direct drilling nine years ago after a decade of min-till,” said Mr Miller, who farms in partnership with his wife, Tracey, on 440ha of land of tenanted land at Airy Holm Farm, near Consett. Half the farm is arable, half is permanent grass.

“We wanted to reduce costs and our reliance on big machinery, as well as improve timeliness. After a while, we noticed that some of the fields weren’t performing to their potential. I thought I needed to find out why.”

The farm’s silty loams are prone to slumping, but a switch to strip tiling using a Claydon drill has helped improve soil resilience and has kept excess moisture away from seed after heavy rain.

Further investigation was needed, so Mr Miller spoke with his Agrovista agronomist, Nick Wilson, who together with the company’s precision farming specialist, Steve Butler, drew up a plan last autumn to conduct soil variation scanning across 189ha of the arable land.

“The idea was to see if the poorer areas of the field were linked to underlying soil problems that we weren’t picking up,” explained Mr Miller.

The results were compared with historical satellite biomass images to see whether establishment and yield were affected by soil type so that limiting factors could be investigated. The results showed considerable variation within fields, with some areas inherently more fertile than others, with limited physical options to improve matters.

“The intention is to use the findings to produce a variable rate seed map so that we can compensate for areas with less potential, evening up crops and producing better gross margins,” he added.

The next step was zone soil sampling, overlaying 1ha grids over zoned areas produced by the soil variation scan to test for key nutrient status and pH and enable variable rate fertiliser applications.

“I firmly believe this is a route to becoming more efficient and profitable, matching input need to crop potential,” says John.

“We wanted to assess our soils for these two things in a particular. I think ELMS payments will be based on these, and knowing the levels might also help us to get involved in carbon trading and the opportunities that brings.”

Mr Miller explained the support he has received on his journey is second to none. “Right from the moment I talked to Nick and we decided to proceed, the service has been faultless.

“Steve came out immediately, we talked things through and he explained the benefits of everything we were undertaking. Chris Martin, Agrovista’s head of soil, then came on the farm to talk through the results, what we needed to do to get things back into balance, and what we needed to avoid. It was very helpful to see what all this meant in practice.”

“They have also been very quick to respond. I called Steve in February saying I was going to start top dressing in two weeks. I had already bought NPK compound, so couldn’t variably spread this season, but I knew they couldn’t test within six months of fertiliser being applied.

“They were out as soon as they could travel and tested the whole area, followed by the zone tests a day later. I was impressed and we now have everything in place to start variable applications of seed and straights this coming season.

“We’ve started to come out of the dark and understand more about how we can measure and manage what we are doing. As tenants we don’t own soils, only what we grow in them, so we need to make them as productive as possible. I believe we have taken a big step in the right direction.”