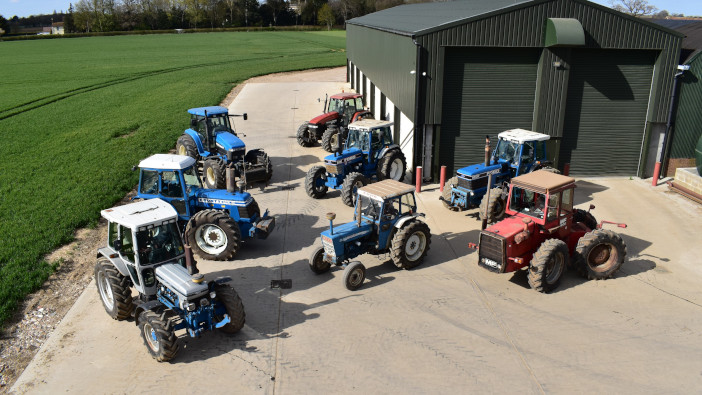 Cheffins has announced a series of record prices from its latest auction. The Shrubbs Farm Collection in Essex was sold on 3rd July at Sheering, near Bishops Stortford and saw several machines fly past their pre-sale estimates.

Notably, a 1983 County 1474 short nose tractor was bought by a UK collector for £210,112. According to Cheffins, this is the second-highest price paid for a vintage or classic tractor at auction to date. The tractor, which had seen only two owners from new and had just 100 hours on the clock, had a pre-sale estimate of between £60,000 and £70,000.

Oliver Godfrey, director at Cheffins said: “With over 90 classic and vintage tractors going under the hammer and a host of excellent spares and implements meant the onsite auction team were in for a very busy day. What unfolded was nothing short of spectacular! The Liddell family had been collecting for over 35 years and had quietly put together one of the most genuine and original collections of Ford and Ford conversion tractors including Doe, County and Roadless in the country. With collectors and enthusiasts emerging from the darkness of various lockdowns and armed with fresh enthusiasm and cash, they were eager to feed their passion for all things classic and vintage.

“A huge enthusiastic crowd along with hundreds of registered bidders had assembled at 9am on sale day morning and the prices and amount of bidding was incredible and consistent throughout the day. Bidders came from all four corners of the UK as well as the continent and even interest from the USA. A record-breaking auction and one which we at Cheffins were very proud to have been instructed to conduct. Collections of this calibre are becoming rarer and rarer and with the prices achieved shows the sheer enthusiasm and passion for the collecting scene has not abated even with recent events.”

The next Cheffins Vintage sale will take place on Saturday 24th July at the Cheffins Saleground near Ely. For more information go to www.cheffins.co.uk

All figures quoted are inclusive of 6% buyers’ premium and VAT