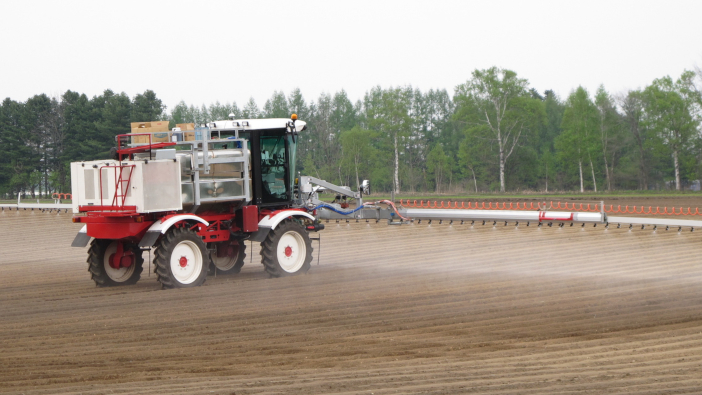 One of the machines exported to Japan, fitted with Kuroda spray packs

Knight Farm Machinery has seen its sales to markets across the world continue to grow, with a consignment of seven machines being dispatched to Japan, five going to Israel, two to New Zealand and other units heading to Belgium.

Japan is a consistent market for the company, explained sales manager David Main, with the latest orders meaning there will soon be 60 machines working there.

“Most of their orders are for a high specification vehicle equipped with a Claas cab and rear-mounted engine, to which the Japanese manufacturer Kuroda adds its spray tank, plumbing and a front-mounted boom,” he added.

The latest consignment also includes one of the company’s mounted sprayers, with a 1,900-litre tank and a 28m V-fold boom, paired with a 1,500-litre front spray tank.

The new Israeli order is for two self-propelled machines and one mounted sprayer, all fitted with air-sleeve booms. These will be used to grow a wide variety of crops including maize, cotton, vegetables and cereals.

An SP2060 self-propelled unit is making its way to New Zealand, with a 6,000-litre tank and a 30m boom with an Air-Tec system fitted. This will be put to work on a farm near Canterbury on the South Island. The other is a 4,000-litre, 24m de-mount kit for an Isuzu truck, which will be delivered to a customer in the Ashburton area.

Belgium is reportedly a newer market for Knight but has already taken delivery of three bespoke machines, with Knight supplying the vehicle and spray tank, while the importer fits their own boom and spray kit.