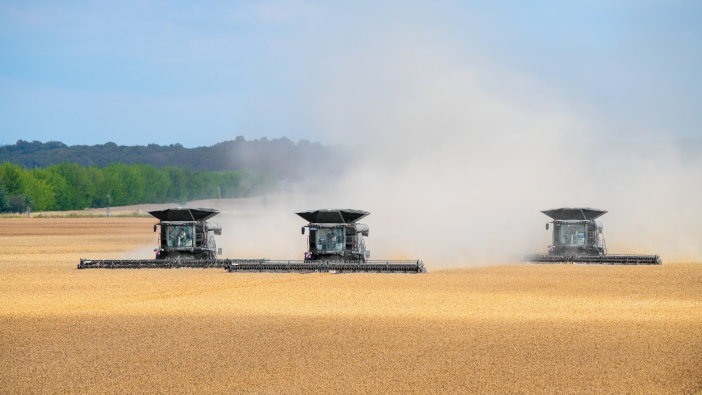 At Fendt’s 2021 press conference, the company quickly acknowledged the impact that Covid-19 has had on the flow of goods and delivery and noted that 2021 continued to be heavily influenced by the global pandemic. Despite this, strong growth in the global machinery market meant that Fendt, and AGCO as a whole, was positive about its prospects.

“This is already the 17th month of the coronavirus pandemic, and none of us could have predicted what we’ve had to endure. The economy is off-kilter. The pandemic has affected us all,” said Christoph Gröblinghoff, chairman of the AGCO/Fendt Management Board.

He added that Fendt had been able to respond to the challenges, as well as making up for missed production days thanks to good relations with suppliers and the processing capability at its German sites. Rising vaccination rates worldwide were also cause for celebration and the company is currently vaccinating at the Marktoberdorf, Asbach-Bäumenheim, Feucht and Wolfenbüttel sites.

“The industry is healthy, the order books are full. We are very grateful for that. Farmers are more important than ever in such adverse times. They are the ones who put the food on the table,” the chairman said.

Looking at figures from the European Agricultural Machinery Association (CEMA), the industry has been in a state of continuous recovery since the low point in April 2020.

Mr Gröblinghoff said: “We can confirm that our industry is not fundamentally affected by the impact. Three-quarters of those surveyed rate their current situation as very positive and expect sales to rise. The boom is not showing any signs of waning. And it’s no wonder, with producer prices for wheat and pork higher than ever before, and farmers making good money. This leads to a high level of readiness to invest, which will result in market growth of around 7% throughout Europe.”

Fendt has also increased its market share, with the company expecting to sell 188,000 tractors in 2021, bringing the market back to 2012 levels – a record year for the industry. The upturn is expected to continue throughout 2021 across Europe (except for Turkey) and market share has reached 10.6% across Europe, with global sales markets also up.

Increased demand leads to greater investment internally and the company announced that it now employed some 6,300 people across its six German sites, more than 300 more than the same period last year. 4,000 of these work at the headquarters in Marktoberdorf and 500 are employed in research and development.

In April 2021, a new development building in Marktoberdorf was opened, creating around 140 jobs in the field of electronics, software and digitisation.

“This team is working on the digital future of farming,” said Mr Gröblinghoff.

Fendt can reportedly look back on a very successful 2020, despite the challenges. The brand has increasingly established itself in new territories, including North America, Brazil, South Africa as well as Australia and New Zealand. The large tractor segment, the Ideal combine harvester and the Momentum precision planter are said to be key products in winning new custom.

Elsewhere, the Ideal was successfully introduced in South Africa this year, while orders for large tractors rose significantly in Australia and New Zealand. Positive growth was also reported in the green harvest segment, where Fendt round balers saw an 80% increase in orders compared to the previous year.

“Our success is also highly valued within the AGCO group. The global growth of the Fendt brand is one of the most important initiatives at AGCO. This is possible because we offer machines that are in demand worldwide, but also in our European markets. In doing so, we are laying the foundation for the future,” Mr Gröblinghoff said.

He concluded by saying that Fendt was part of a major digital revolution and was playing a significant role in shaping that movement. Part of this is the FendtONE system, which offers the user centralised, digital data, which Fendt believes will be a basic prerequisite for Farm2Ford, compliance with sustainability guidelines and future traceability throughout production chains.

“FendtONE is one of our answers to sustainable farming,” Mr Gröblinghoff said. “Agriculture must become more transparent for today’s society and its desire to know more about the production of food. Many consumers want to have all the facts so they can make informed purchasing decisions. Sustainable farming is both a burden and an opportunity because there’s huge potential there for greater profitability and efficiency.”

He also highlighted the ongoing alternative drive technology project that Fendt is working on with Fraunhofer ISE. The pilot scheme includes taking generated electricity to run the Fendt e100 Vario in fruit cultivation. The company is also a partner in the joint project H2Agrar, funded by the German state Lower Saxony, which aims to develop a hydrogen infrastructure with a focus on agriculture.