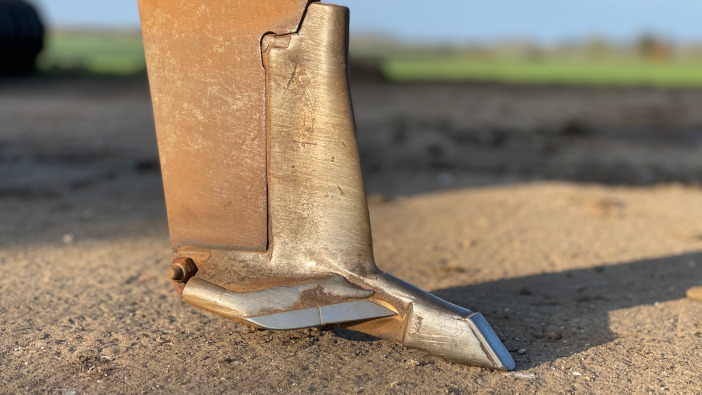 The GLX point developed by Agricast has become the company’s fastest selling product in its history, with 50 orders being supplied in just ten months. Introduced in December 2020, the GLX is backwards compatible with the Sumo GLS and is designed to deliver medium depth cultivation with minimal soil disturbance.

With prices starting at £37.50 per point, William Robinson, managing director at Agricast, believe the GLX offers one of the lowest costs per acre available, especially as they feature extensive tungsten reinforcements on the leading edges, hard facing on the body and a reinforced shin.

“We’ve been very pleased with how the GLX point has been received, and to have sold nearly all our stock in less than a year is amazing. We didn’t think they’d be so well received, but it appears that we’ve found the sweet spot between durability, price and effectiveness. We’ve been delighted with the feedback we’ve had from people who’ve used them.”

Joe White from Cannon Heath Farm in Hampshire is one of Agricast’s satisfied customers. “The soil here in Hampshire has a lot of flint and clay cap, and we’ve been a bit disappointed with how quickly some OEM points have worn, so we decided to test three points,” he said. “We were very impressed with how well the Agicast GLX performed, and while we have no scientific evidence, it has shown the least wear, which is very pleasing indeed.”

Another farmer who has been pleased with how Agricast’s GLX points have performed is Thomas Witter of R and J Witter Farms in North Lincolnshire. “We have used Agricast’s GLX points on 350 acres and the point and wings are still in very good condition and they’ve surpassed any expectations we had and they’re fantastic value for money, especially when you compare them to some OEM points we used – they only did 100 acres and we’re totally worn!” he said.

Before the GLX point, Agricast’s fastest selling product was its High Strength Wheel, a 24-inch, eight spoke design that is more robust than traditional models. Agricast sold 1,000 wheels in eleven months and has since introduced an 18- and 22-inch version.

Mr Robinson is currently developing several new products ahead of Lamma 2022 and is confident that they will be as popular. “We know how important it is to offer long-lasting parts that perform as well, if not better than OEM parts, at attractive price points. We’ve been working hard on product development during the pandemic, and we’re looking forward to revealing what we’ve come up with in January at the NEC,” he explained.

For more information go to www.agricast.net

New Stealth Point from Agricast to launch at Lamma

Pöttinger launches Servo T 6000 plough for tractors up to 500hp