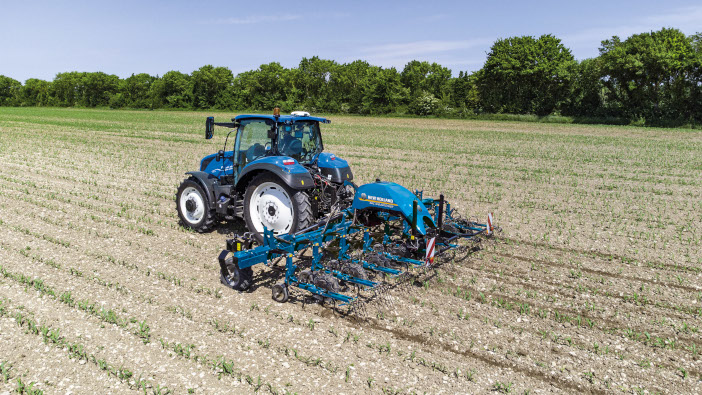 Launched at EIMA, New Holland has introduced a new range of mechanical weeding cultivators, equipped with a camera self-steering system. The SRC SmartSteer complements the existing range from 4 to 18 rows (fitted with mechanical guidance) and is available in eight models.

Chassis widths are either 6.7m or 9.9m depending on specifications and can suit row spacings of 45cm, 50cm, 60cm or 75cm. Both widths fold down to 3m in either three or five sections.

Each section is mounted on a parallelogram for consistent ground tracking. A separate control wheel guides the depth automatically, while two gauge wheels are positioned at each end of the machine to enhance stability. Each cultivator element comprises five universal vibrating teeth or three VCO teeth depending on the row spacing.

Two rotating plant guards complete the tool, allowing it to work smoothly and as close as possible to the row. These can also be adjusted to suit different crops, or raised out of work when the crops reach a critical growth stage.

The SmartSteer guidance system uses an optical camera that detects colour differences between the soil and the weeds, following the row with extreme precision thanks to the hydraulic interface system. Using an ISOBUS system, the grower can also be linked to GPS for individual-row section control.

A host of optional tools are also available, including rear harrows to bring weed roots to the surface or rotor stars to work the space between the plants. On larger, 60cm to 75cm row spacing machines, it is also possible to mount a compact pneumatic seeder to help plant a following crop on the final tilling run.

For more information go to www.newholland.com

New Stealth Point from Agricast to launch at Lamma

Pöttinger launches Servo T 6000 plough for tractors up to 500hp