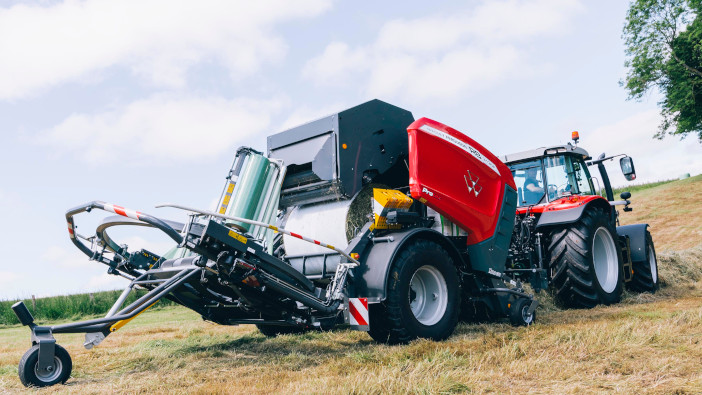 For the 2022 season, Massey Ferguson has announced a range of updates to its MF RB and MF Protec machines, designed to improve forage quality and enable users to specifically select certain features.

For the Protec range of baler-wrapper combinations, the company now offers the option of film tying, which can be installed alongside net tying for greater versatility and to meet farmer requirements. Switching between net and film reportedly takes less than two minutes using the Rapid Reload System, which can hold up to three rolls of net, film or a combination of the two.

Replacement rolls can be loaded from the ground using Comfort Load, on which operators stand the net or film vertically onto a loading arm, making it easier to lift it into the horizontal position. In addition to this, a new onboard water tank option is available, enabling users to wash their hands after replacing the roll or performing maintenance work. This also comes with a soap dispenser in the lid.

Other new features to the round baler and baler-combinations include a new bale tipper for improved ground following and with a new hitching system which can be moved into the transport position from the cab; new, optional LED lighting, with one light on the wrapping unit and two others underneath the side panel; and the option of a hydraulic jack.

Massey Ferguson will now offer its fixed chamber and variable chamber round balers, with or without the Xtra cutter, and baler-wrapper combinations with two option packages; the Silage and the Comfort. These combine the most popular specifications for different tasks to help users more easily tailor their balers to the task.

MF RB F and MF RB V balers can also be equipped with an onboard spare knife holder, allowing operators to carry spare knives and speed up maintenance, or change the chop length based on conditions.

For more information go to www.masseyferguson.co.uk