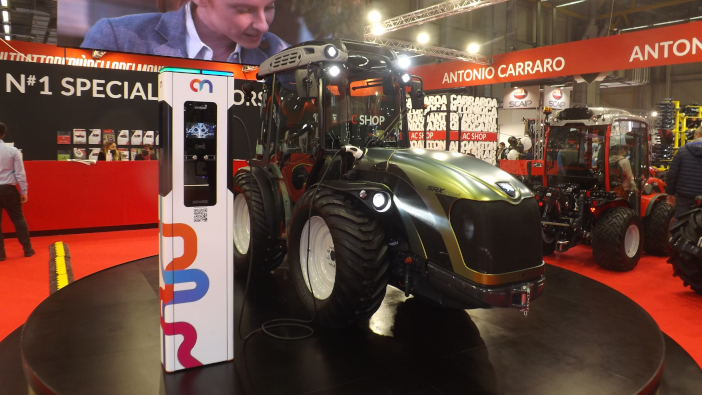 One of the biggest launches at EIMA was the introduction of the SRX Hybrid by Italian specialist tractor manufacturer Antonio Carraro. Developed alongside Ecothea (a startup of the Polytechnic of Turin which specialises in the design and prototype of agricultural electric vehicles), the aim was to build a compact tractor that features Antonio Carraro’s reverse drive system and articulated frame while still offering an electric/diesel engine.

The result comprises a 55kW combustion engine with three cylinders and Common Rail turbo intercooler fuel injection system and a 20kW electric motor. This is equivalent to 102hp, on par with the most powerful diesel models offered by the company. The combination is said to ensure continuous traction when working with a PTO, as well as during transportation and in material handling.

Subsequent models will be able to work in a fully electric mode, exploiting the lithium-ion battery. The machine will therefore work with zero emissions and the electric motor is recharged every time the brakes are actioned or via the specially designed charging station. An additional benefit is the reported 25% fuel savings and a reduction in noise and vibrations.

As with the rest of the range, the SRX Hybrid is said to be stable when working on slopes, as well as featuring an LCD control panel on the dashboard which indicates fuel levels and charge. It’s completed with the latest generation LED lights.

For more information go to www.antoniocarraro.it