New farm manager at Bradford Estates must start from scratch 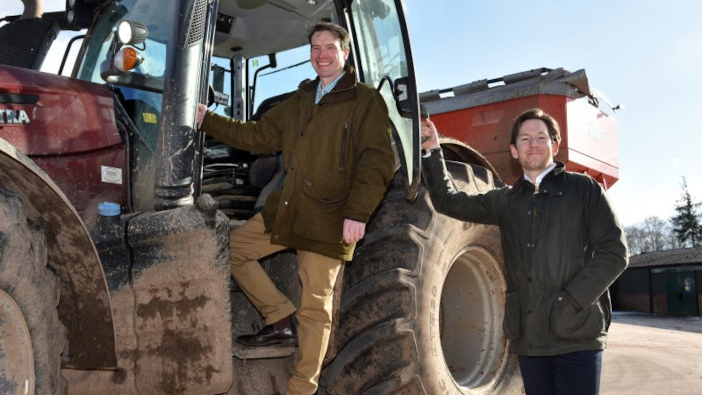 Potatoes or lettuces? Tractors or cultivators? Livestock? These are the questions the new farm manager at Shropshire-based Bradford Estates, Oliver Scott, is having to think about as he takes some of the estate’s farmland back in hand for the first time since the 80s.

“Usually when you take on a new role like this, you inherit the land, it’s current cropping, the team and machinery,” he explained. “But Bradford Estates hasn’t had a dedicated farm manager in almost 40 years so we are starting from the beginning. It means there is a lot to think about!”

“The plan is to farm the land coming back in hand more regeneratively with the view that these practices will be adopted across the wider estates in time,” he explained.

“With regenerative agriculture at its heart, BFLLP (Bradford Farming LLP) will place increased focus on soil health and management – the foundation on which crops, biodiversity and ecosystems depend.”
The Estates, which sit on the Shropshire and Staffordshire border, cover 12,000 acres of land – of which 3,600 acres will be under Oliver’s control.

“Our farmland is a huge asset to us and a really important part of our future plans,” said Lord Newport. “Oliver joining us will help bring all of our ideas and visions together and make it happen – I can’t wait for him to get started.”

Earlier in the year, the Estates had an independent soil expert conduct a survey on its land to build a picture of the physical, chemical and biological health of the soil. These results will help Oliver determine what crops can be grown on what soils.

“There will be an element of trial and error though – it’s very hard to understand the land until you’ve experienced a full season. So in 12 months, we might have adjusted our plans, but that’s okay,” he said

He added that everything they did today was in preparation for years down the line.

“As an example, some of the land can be quite stony so growing potatoes on this land would mean it needs to be de-stoned. But de-stoning soils can damage soil structure, increasing the risk of runoff, and in the long term can reduce organic matter if there is not a long enough rotational gap between each potato crop, it can take years for the soils to recover. Everything we’re planning is for the long-term.”

Oliver joined the Estates from Thelveton Estate in Norfolk earlier this year but it’s not just cropping that Oliver has to make decisions on. He needs equipment and a team.

“BFLLP does not own any machinery or equipment at present and therefore has no legacy to take on,” he added. “This provides the rare opportunity to carefully consider what machinery and equipment are required for the new farming system. We also need to get a team together. We’ll be starting by taking on two full time people later in the year.”

These two new full-time roles will join the 18-strong team at the Estates which Alexander Newport has grown since returning from London to Shropshire two years ago.

“Once we’ve got our plans for cropping, machinery and the team in place, livestock will be the next enterprise to look at; as this will help and improve soil health, increase water retention and help sequestered carbon in the land,” Oliver concluded.